Spring is here and I love it.  It means work of course, and for me it’s hard to hit just the right balance of sitting around and actually doing something, but I try my best.  One problem which always haunts me is that I’m the type who (again while sitting around) usually gets tons of unnecessary projects in his head, starts them, and then moves on before they’re done.  Fortunately I’m not much bothered by this, but someone else here is, and sometimes decides to be helpful and remind me of the obvious…. but most of the time that person doesn’t notice unplanted chrysanthemum collections or realize it’s been years since the boxwood cuttings should have been planted out, so it all works out fine.  How can it not when rain and rainbows and warm sunshine have brought out the daffodils?

Double rainbow over the ‘potager’.  A beautiful sight if you can tune out the industrial park and white vinylrama next door 🙂

I’ve been relentlessly mulching.  It started innocently enough with a load of mulched leaves hauled out of the woods, but then exploded from there.  My neighbors were so generous last autumn with several heaps of nicely chopped leaves and grass clippings that I couldn’t stop lugging them back to the garden.  The entire front bed got a nice layer and I would have kept going but of course ran through all the available bounty.

The front perennial bed all nestled in with a nice mulch of chopped leaves.  The earthworms will munch them all down by the end of  summer but for now they should go a long way in keeping the weed seedlings down.  Did I mention it was all free?

As if that wasn’t enough, for some reason when finished I got it in my head to crack open the wallet and order a load of shredded bark mulch to finish off the yard.  With most of the front already covered I felt finishing with a little purchased mulch might be something the budget could handle, so $290 later I was mulling over another new heap in the driveway.  It seemed a steep price to me but judging from the other $1,000 plus order slips hanging next to mine I guess I’m being downright frugal.  Also, mulch is a gardening expense the boss never criticizes, so now it just needs to be spread.  More on that later, daffodils first! 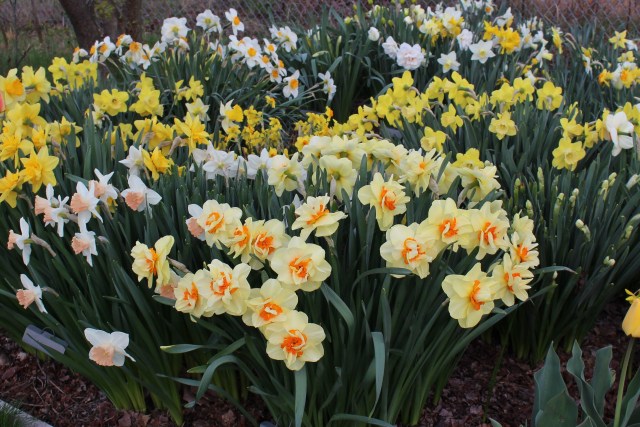 Always a favorite, ‘Tahiti’ is an awesome daffodil.  Sorry if you’re not a fan of doubles, but this one never fails, and the yellow petals seem to glow with an orange shade which I love.

I’m stuck on orange lately.  The daffodil ‘Serola’ tops the list this year. 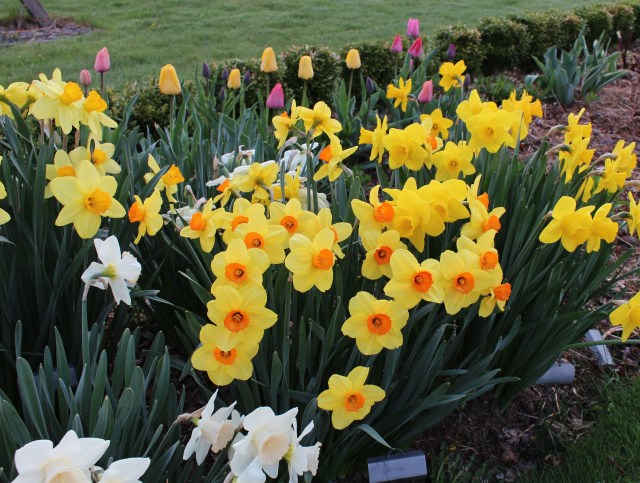 Narcissus ‘Serola’ with the first of the tulips opening behind.  When I divide this bed (hopefully this June) I’ll need to put these out in the front garden to brighten things up even more!

My whining about space in the vegetable garden is entirely due to my weakness for spring bulbs and the abundance of open space left when vegetables finally give up the ghost in September.  It’s so easy to just pop a few bulbs in here and there 🙂 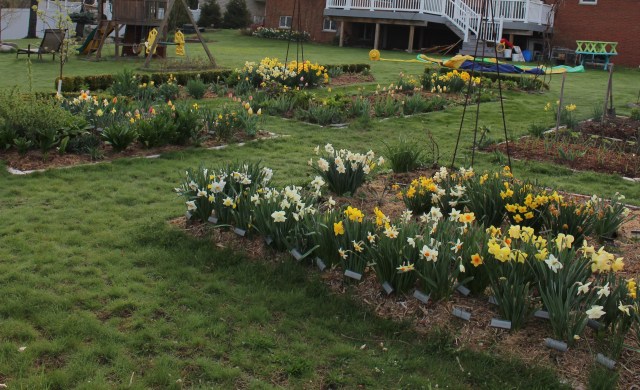 It’s so much easier to line a few daffs out in the vegetable patch than it is to decide on a spot in the open garden!  I’ll just plant a few pumpkins or squash over them in July to make it look respectable again. (fyi it’s bouncy house season so please ignore the deflated mess in the background)

One more orange.  ‘Kedron’ has a color which stands out very well…. if you’re into colors that stand out very well 🙂

Narcissus ‘Kedron’.  Notice the empty spaces nearby.  Not everyone does well here and I just don’t have the patience to nurse unhappy plants along, so while ‘Kedron’ takes off the others just fade away…

Although the vegetables complain, bulbs in general seem to like my lazy (or complete lack) of an efficient watering ethic.  Tulips in particular like the open, sunny, fertile soil, and unless I weed them out (which I could never do) most clump up and bloom.  Even if I do pull a few of the smaller bulbs they just end up in the compost anyway so get spread throughout the garden a few months later when I take and spread the barely rotted goodness.

Yet another plant which needs to find a permanent home outside of the vegetable patch.  This double hellebore seedling is taking up prime bean and pepper real estate.

Believe it or not I’m making progress with my bulb issues.  When I was younger and carefree I used to plant out patches of whatever tulips I had on hand and then dig them up again in June just in time to clear the beds for tomato planting.  It was insanely beautiful (to me at least) and I can’t rule out this happening again.

Tulips blooming in the vegetable garden (spring 2013). These would all be dug, dried, and stored while the warm season veggies occupied the same beds.

Maybe my bulbaholism isn’t getting any better.  Maybe it’s just migrating.  I planted these fritillaria imperialis bulbs out in the meadow late last fall (clearance bulbs) and can’t wait to see how they do.  If I get one decent spring out of them I’ll be thrilled, but in my heart I want them to settle in… even if they do look slightly out of place in the short turf.  Hopefully they enjoy the dry summertime baking this spot receives, and the grass should come up soon enough to hide the yellowing foliage.

My ‘meadow’ is in danger of becoming a bulb field.  The fritillaria imperialis don’t look entirely happy yet, but I have my fingers crossed they’ll at least bloom and then maybe return next spring?

Out front I may have a few bulbs as well.  Early spring is when I love the front beds the most. 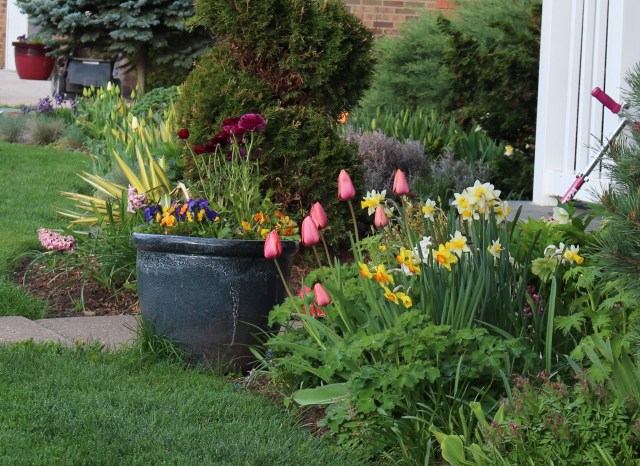 Tulips and daffodils where snowdrops ruled just a few weeks ago.  I should have taken this picture today since I mulched yesterday afternoon, but after all the work I was ready to just sit and relax!

I better wrap this post up.  Now that mulch sits in the middle of the driveway I’ve got plenty to do even from the non-gardening viewpoint.  And it’s not the fastest process since mulch needs to be worked in between sprouts and edges need to be tidied up…. and actually a bigger problem is that I’m coming up with all kinds of bed enlargements and side projects while I dilly-dally on finishing the main project.  I promised to trim back the yews along the side of the house, and this golden arborvitae just happened to show up in the lawn between us and the neighbor.  As long as I’m mulching, might as well create a nice big bed around it 😉 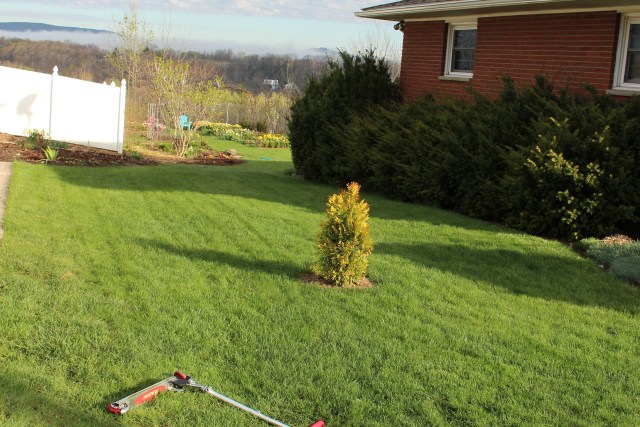 Let me get out there then.  Good luck on all your own spring projects, may they progress more quickly than my own!