Yesterday was forecast to be a gloomy day of rain, with strong winds and a good chance of thundershowers, but the morning surprised me with scattered sun and a breeze almost strong enough to blow away the swarms of blackflies and keep the mosquitos grounded.  It was nice.  It was warm.  I took some pictures and actually did a few things rather than sit inside, and then when the rain and wind did finally come through it happily matched afternoon break time, so win-win!

Thinking the weekend would be lost to rain and cold, the lawn was mowed and even edged Friday afternoon.  What a guilt-free way to greet Saturday morning.

Now I’m not going to promise I did anything important or essential, but I did do a few things which have been haunting me like moving Lycoris bulbs and repotting some plants for winter.  Now if that gets you thinking this is a good time for moving Lycoris bulbs, think twice.  It’s probably not, and summer dormancy is probably better, but they’re moved now and that’s something which didn’t happen in August. 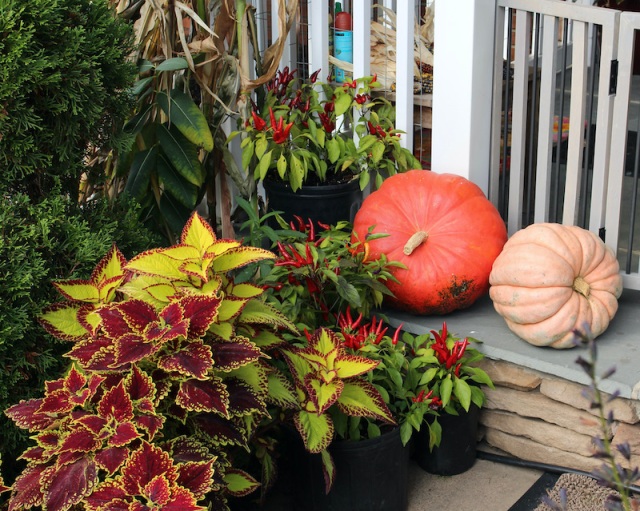 I still love the pumpkins and finally found a use for the peppers which have been sitting on the side of the house all summer.  The coleus also look perfect, but that will change quickly as nighttime temperatures begin to drop.

Beyond that I just spent the morning enjoying the autumn garden.

Some lingering annuals and autumn colors on the hydrangea.

The breeze from the approaching cold front must have been carrying a few Monarch stragglers, since every now and then I would disturb a bunch hidden amongst the flowers.  They were all hungry and focused on feeding, not like the lazy floating through the air which the earlier crew was doing a few weeks ago. 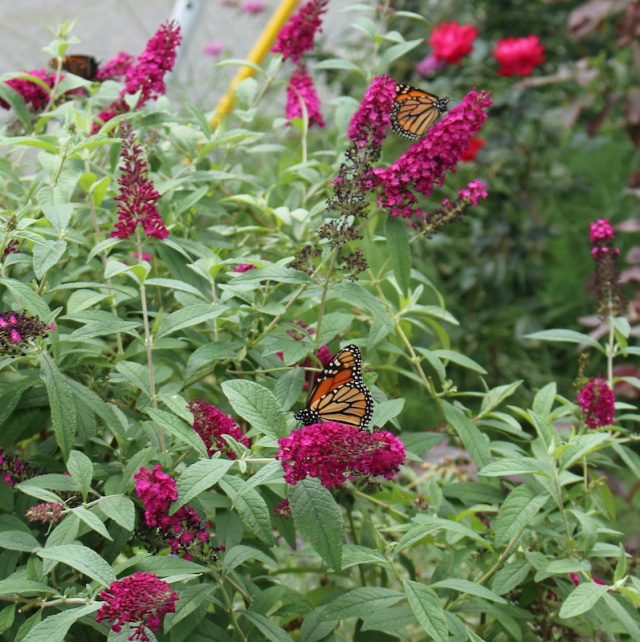 I’m glad I deadheaded the buddleia a few weeks ago since it’s brought on one last flush of flowers for these late Monarchs.

I think there were enough flowers for a little rest-stop but with the clock ticking all the Monarchs were gone by early afternoon, riding the winds in front of the approaching rain.  Safe travels! 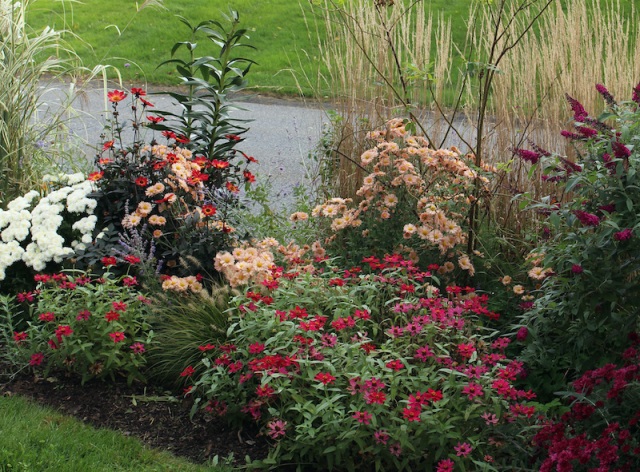 It’s chrysanthemum time, and I love all of them except maybe this buff “peach?” colored one.  Is it the brown grass behind or the hot pink in front, I don’t know, but something is off with these colors.

On another note, a few years ago a box or two of Minnesota-hardy mums came to this garden and did exceptionally well in spite of neglect and poor planting locations.  During dry summers their seedlings would spread freely and this gardener was quite pleased with some of the results.  Only about four of the original plants survive but only about two of the lost ones are missed, so in spite of the money spent this gardener feels like he made out better than he usually does.

Maybe not the nicest color, but I do like the more unusual flower forms of many of the seedlings.

I guess this is where I say mums make nice porch pots and I’ve bought my share of tight pots of perfectly budded plants, and then enjoyed them completely until they dried out one time too many.  If they’re hardy enough they will also do well in the garden, making a nice lump of color for a few weeks anywhere between August and October depending on the cultivar. 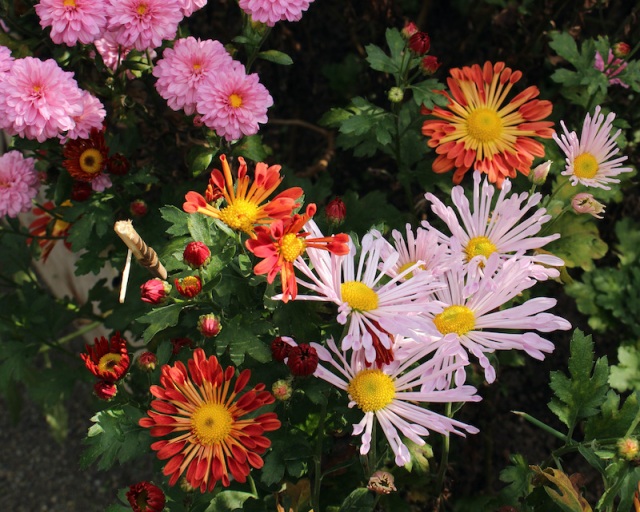 This orange and gold seedling is nice enough to keep for another year… maybe the pink as well, but I already have a few others which are similar.

My confession is I find them kind of boring.  They’re very neat and uniform, but I like flowers that sway in the wind.  I like to see the bees working through them and plants which keep putting up more buds with larger flowers and unusual petal types.  Once again the dream of a perfect garden with ribbons and pools of fall color falls to the wayside in favor of ‘interesting’.  Oh well 🙂

‘Cheerleader’ is the last of the hardy football mums.  I might have to try one more time to get some more which will tolerate my on again off again plant care program because this one is friggin awesome!

Let me just add that ‘interesting’ isn’t always as beautiful as the perfect pots from the nursery.

One of my favorite colors are the white with a pale yellow centered ones.  Awesome color, but don’t look too closely at the foliage.

I transplanted all of these in June and chopped them back to sticks and worried a little that they would recover.  They did, but then the endless rains of August brought on overly lush growth which ended up nurturing disease and killing off much of the foliage and blooms.  A note for the better gardener is that chrysanthemums appreciate good air circulation and full sun, and dislike a crowded bed with overhanging sunflowers and milkweed. 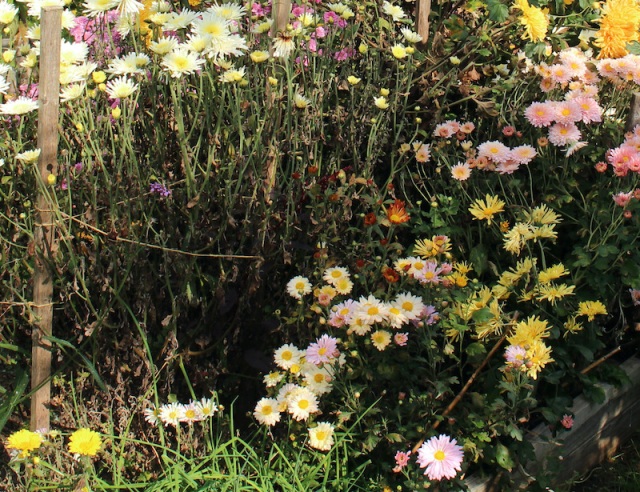 By now some of the plants are completely leafless.  Some are fine.  A real ‘breeder’ would probably yank all the defective ones…

Of course there’s little chance I’ll address the disease problems.  I’m more of a thoughts and prayers kind of gardener, not one who acts on these things, so maybe next year will be better.  On the other hand I will rip out a few of the ones which don’t thrill me, since new seedlings are much more fun than seeing all the same ones returning next year 😉 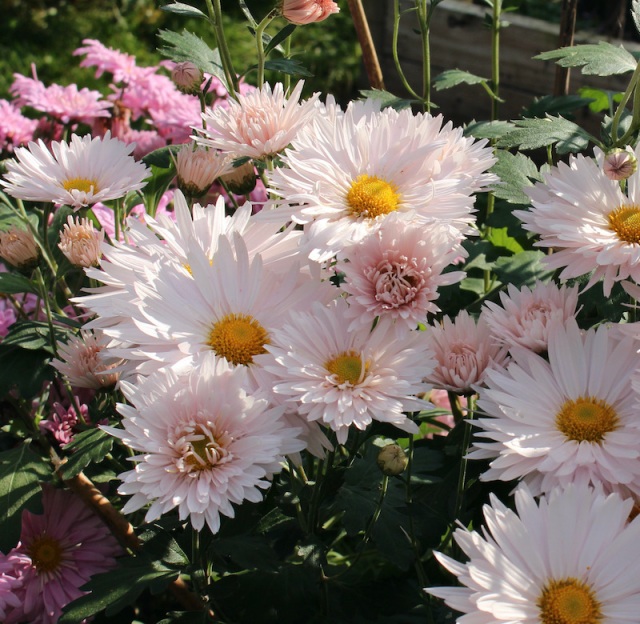 In another bed this ‘cafe au lait’ color is something I like.  Hopefully this one proves hardy.

Pink with interesting petals, but possibly weak stems?  I’ll see today how it fared through yesterday’s rain and wind.

Hopefully no one is overly impressed with my seed-growing adventures.  To put it in perspective there are often seedlings which just show up on their own, and are often much nicer than anything I nurture.

Just like that a seedling appears.  Of course I’ll keep it, but maybe move it to a spot which isn’t soaking wet all winter… 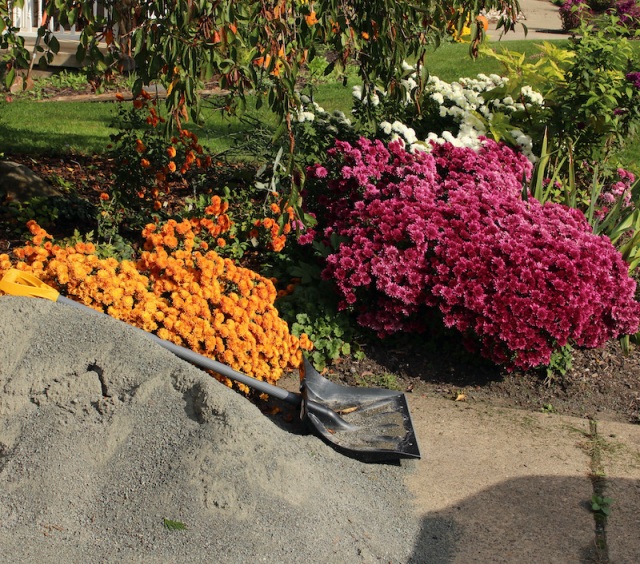 Hmmm.  Has the leftover sand been sitting in the driveway since August?  Someone better move it before that same someone accidentally tries to run a snowblower through it in December.

Speaking of surviving for another year, the pots are starting to migrate closer to the garage and their winter housing.  The new bed on the side of the garage has been perfect for keeping things off the driveway… sort of… as I realize there are half a dozen fairly large pots sitting alongside the sand pile…

I suspect this cold front will push all the caladiums into dormancy.  They’ll probably go into the garage first so they can stay out of the rain as they die down.

So that’s the mid October update.  Chrysanthemums and the wait for the first frost pretty much sum it up and given the ten day forecast both will be around until at least the end of the month.  I’m fine with that and I won’t even mention those other things which are starting to preoccupy my every other plant thought.  The first ones are starting to sprout and of course new bulbs have been planted.

Have a great week 🙂

23 comments on “A Taste of Autumn”