It’s been almost two weeks since we came back from vacation and you’re about to hear something you don’t often hear on this blog.  I was busy.  Seriously.  For about five days straight I put in a good four or five hours of work in, either here or in my Mother in Law’s yard.  Back in the good old days work could have gone on from dawn to dusk, but today it’s a different story and that’s about as long as I want to work.  Still it makes a huge difference.

The front border has loved all the rain.  It would have been the ideal year to pull all the fennel and plant a mass of zinnias and cannas (as the plan was) but… there’s always something else.

Before you’re too impressed by this flurry of motivation I think it’s important to come clean on one of my fairly well-guarded secrets.  Not really a secret I guess,  but there’s a reason I can spend a bunch of hours in the garden, day after day, and still manage to get up and get going the next morning.  I’m a high school science teacher, and with a summer vacation from the middle of June until late August I can still be fairly lazy even with a couple hours of breaking a sweat in the garden 😉

From the other end of the front border… at just the right angle… things look amazing.  The main flush of summer color is beginning!

So now I hope the confession of my profession has not darkened your opinion of this blog or this gardener.  It’s always a mix of reactions ranging from ‘you’ve got the life’ to ‘God bless you’ so I never know where people’s opinions lie until the truth is out.  All I’m really sure of is that most of my powering away in the garden is probably a response to the hours I spend each morning working on a horrible class which I need to finish this summer.  It’s really not that bad but in addition to being naturally lazy, I am also a terrible student with a passionate hatred towards online learning, and after nearly a year and a half of online learning I think my cup runneth over.

Gratuitous photo of a cardoon (Cynara cardunculus) flower.  I love them, they’re stiff and spiny and of course stupid me needs to touch them nearly every day to get a painful reminder.

Enough whining, here’s an update on a slightly more in control potager, although slightly more in control is completely false.  It’s weeded.  There are a few vegetables, but most of the left side is a thicket of eight to nine foot tall persicaria and sunflowers.  I have to duck and crawl to get through the paths but secretly I think it’s kind of awesome.  The only down side is that the majority of the sunflowers are pollen free and as a result there has not been a good seed set.  As I sit hidden in my potager thicket I can hear the goldfinches chattering their complaints as they pick and pick looking for some seed that has actually plumped up and been pollinated.  Fortunately in the past few days I’ve noticed a few plants with pollen have opened their first blooms and that should be enough for the bees to spread around and get things going. 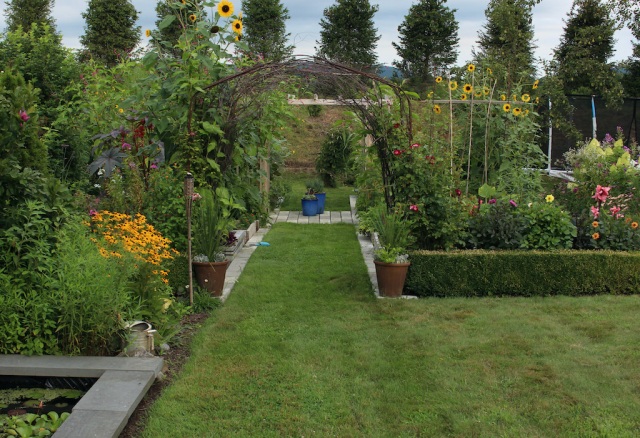 As usual the potager has become overrun with flowers, and the vegetables have become scarce.  If anyone asks I just tell them the endless rain rotted things and if I’m lucky they accept that and pick up a few beans from the farmstand 🙂

A big part of the potager purge was removing old bloomed-out larkspur and poppy stalks, and all the other volunteers which were nice enough until they weren’t.  Fortunately there’s always something else, and although the new phlox bed has become a complete failure, the old phlox bed is filled with the usual stars. 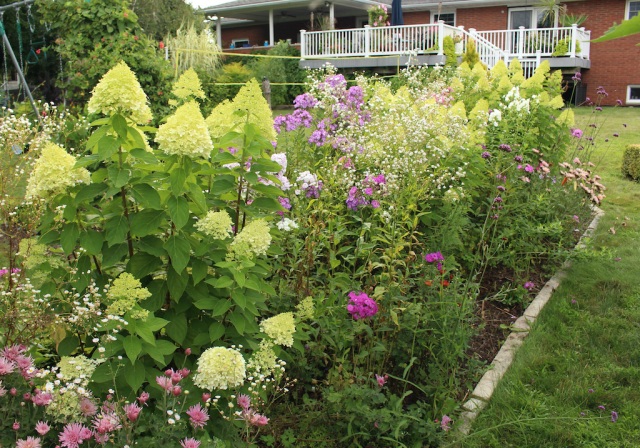 Phlox paniculata, Hydrangea ‘Limelight’ and some silly chrysanthemums who think August is an ok month to flower.  Here the plan was remove phlox, plant hydrangeas… but as you can see I never got around to moving the phlox.  Oh well.

I’m never sure just how much of my babbling is memorable, but just in case you missed me repeating myself the first twenty times, tall garden phlox (Phlox paniculata) are a favorite of mine.

A nice bright phlox seedling which I’ve already set aside because I like the color.  Honestly, I don’t think I could rule out the possibility that some time in the future a whole section of the yard gets dug up just to plant phlox.

Although I do love phlox they don’t always feel the same way towards me.  Last week I mentioned that the entire bed which I cleared out and devoted to a few favorites is today just a swirling vat of mildew and spider mites and whatever else likes to kill phlox.  Some of the plants are literally about to die and it’s kind of embarrassing that a native Northeastern American wildflower can’t be bothered to grow here.  Figures, since just yesterday I saw a beautiful clump of pale pink phlox growing inches away from a busy road and in the yard of a house which could have passed as abandoned but probably wasn’t.  Maybe my phlox patch needs some road salt and the occasional roadkill thrown on… that’s an idea I guess. 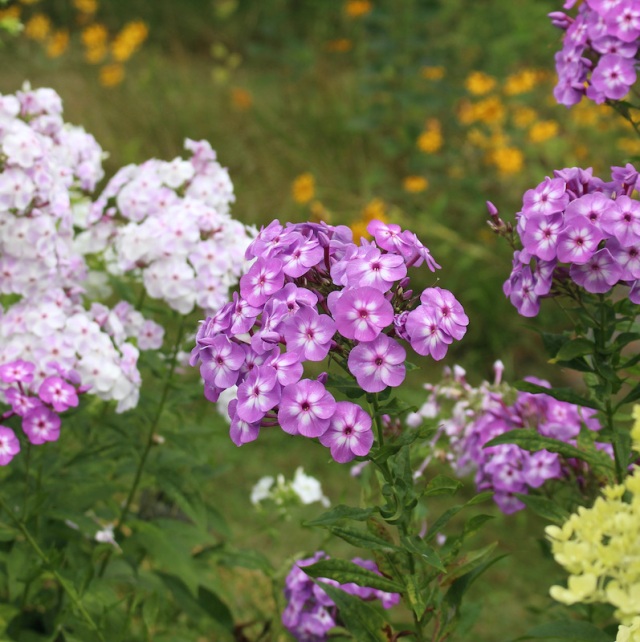 This week’s cooler temperatures has really brought out the color on the phlox, if you only consider the ones which haven’t decided to die yet.  There’s a nice pink flush on some of the whites, the white center stars are bright and not faded away, and the stronger colors aren’t washed out by the heat.  There’s also a good spicy fragrance to many of them.

One of my favorite phlox seedlings.  I need a big patch of this one.

Now I’m really thinking about turning more lawn under to make room for a big phlox patch.  I think I’d like that.  A lot.  Hmmmm.  Unless they all decide they should die on me, but in that case I’d just plant daffodils between them.  Rumor has it I already ordered more daffodils than I should have, so I’ll need the room anyway since my daffodil purchases were based on an assumption I would dig up and give away some of the too-many I already have.  My bad.

Caladium update.  I finished potting them up.  I’m still obsessed.

I need to check myself.  There are two new raspberry plants sitting out on the driveway, fresh off the clearance rack and waiting to start a raspberry patch goodness know where, but apparently in my garden even though I have no idea.  All I know is I love raspberries just like I love phlox and caladiums and daffodils and hydrangeas and all the other stuff which always comes before there’s a plan.  Maybe plans are overrated, and that’s just what I’m telling myself… mostly as an excuse since I also have a vague suspicion there are new snowdrops waiting to be planted.  It’s been months since snowdrops have been mentioned here but sadly that obsession is still burning bright and you only have another two or three months before someone starts bringing that up again on a weekly basis.

All in good time.  Hope your week is going well 🙂

19 comments on “Back in Business”

Leave a Reply to Lisa at Greenbow Cancel reply