There’s little question as to how I feel about hard work, and this is always the time of year when I start to wonder if it will ever end.  Between the pests and pestilence that try to take over every time your back is turned, to the weeds that spring with almost an unholy vigor out of any unmonitored patch of soil, to the searing heat that jacks up the water bill, I just don’t understand those people who smile wistfully and claim to just “love gardening”.  They’re probably the same people who put on a sunhat and white shorts, grab a pair of teal garden gloves and a cute little English trowel, and then head out to the parterre to plant a tray of nemesia while birds are singing and a fountain sprays in the background.

The no-work mullein out front has topped 9 feet and greets each morning with a fresh show of buttery yellow flowers.  I love it, the bees love it, and sadly the mullein moths love it as well, and have darkened and nibbled a few of the stalks.

Here it’s a different story.  Covered in bits of green weed wacking debris, with dirt up my arms and half blind from the sweat that kept running into my eyes, I was wondering if the sore muscles and frequent blood donations were worth it.  Someone came by and said “you’re filthy don’t even think of going into the house like that, I just cleaned the floor”, so there I sat dripping even more sweat -since it’s also a billion degrees out- trying to make a little sense of it.

Smarter people just sit on the porch and enjoy the morning light.  The porch is easy, plants get dragged out from the winter garden in the spring, and just need a little watering every now and then.

I have nothing against sunhats and teal garden gloves, it’s clearly jealousy, but I can’t help wondering why I keep doing this to myself year in and year out.

July is wrapping up so it’s probably time to finally plant the last of the (even more) perennial seedlings which seemed necessary in February.

…and then it’s a beautiful morning and the light is perfect and the house is quiet and I love it all… well almost all, the front border along the street is too dry and I’m kind of giving up on that, but all that other bother of lugging plants in and out, and dividing and moving and planting, and digging and hauling and weeding and mulching and watering… well you get the picture, I guess it’s worth it.

Things lugged out onto the deck are hitting their summer stride.  As usual it’s a bit of a mess, but I love filling the whole place with way too much.

The deck is a safe zone although you wouldn’t think it.  I can go out there and just take it all in since the bulk of the work is done in May and June and then it’s smooth sailing until October.  Drip irrigation and time release fertilizer make my coffee in the morning and a drink at night much more pleasing than dragging a hose around  and feeling guilty about letting them dry out once again. 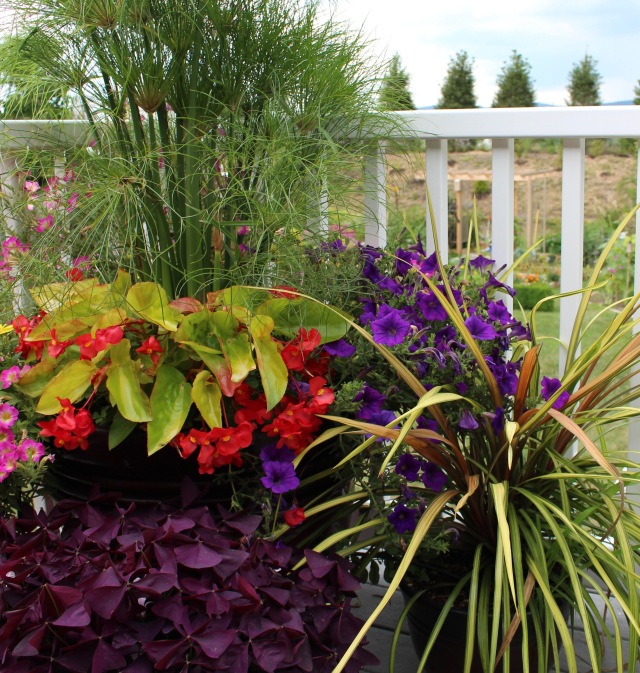 I DID NOT like ‘Canary Wings’ the first time I saw it, but this spring two of these relatively new begonias jumped onto my cart.  Studies show I’m a sucker for anything with yellow leaves.

The biggest success this year has been ‘Alice DuPont’, a mandevilla vine which has survived two winters with me so far and has finally found a place where she can show off her amazingness in a way that does credit.  She’s come a long way from the pot of brown sticks which exited the garage in May.

The far corner of the deck.  Hopefully the rickety trellis of old miscanthus stalks can carry Alice through the summer.

I’ve added a few new things this year but nothing too exciting.  The fruity colors of the lantana and purple angelonia are perfect, but as usual I fell for petunias and calibrachoa again, and after a strong start to the summer they’re already looking a little tired. 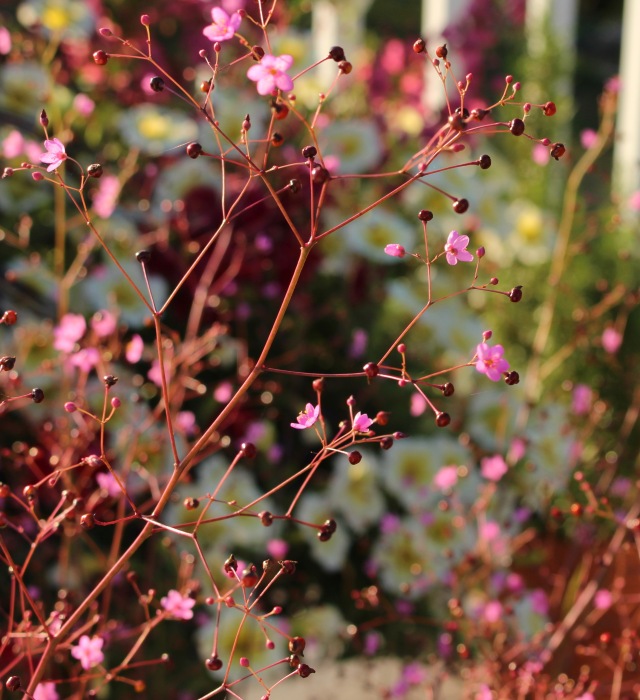 Jewels of Opar (Talinum paniculatum) came up in the soil of a gifted plant, and yay for surprises!  It’s like a pink baby’s breath, and although it doesn’t wow like Alice it’s good to also have plenty of flowers which don’t yell nonstop.

Something else will take over for the petunias.  Nothing in this garden is ever one and done, and it’s the changes throughout the season which keep me interested.  Maybe by September even Alice will bore me! 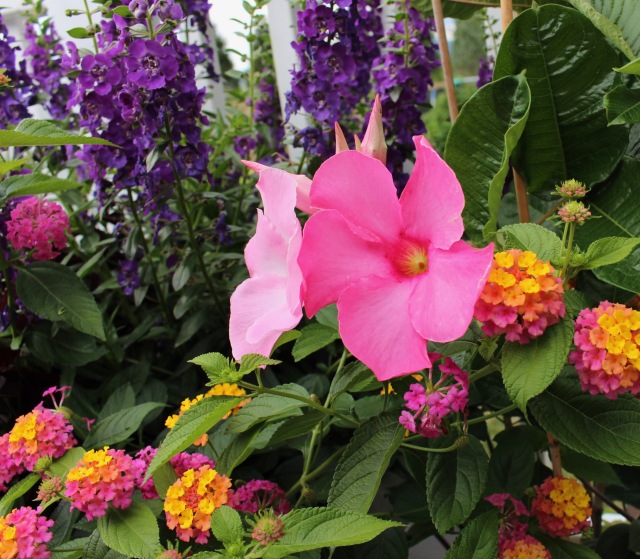 When things come together you really forget all the grumbling about digging and storing cannas and replanting tropicals each year.  While the heat is sucking the life out of the perennials of June, the southerners and tropicals are stepping up. #summerstrong!

Cannas by the street were supposed to be complemented by an airy froth of purple verbena… but then a clowncar of marigolds pulled up and unloaded all the orange.  But I really can’t complain about volunteers, so of course they stayed.

Even the tropical garden is back on the love-it list.  A lack of rain is stunting a few things, but you’d never know it, and even the sunflowers are welcomed back… although I did pull dozens in May…

The tropical bed looks less tropical and more just bright annuals this year.  Still nice to look at as you walk next door for a dip in the pool.

Admittedly I’ve allowed a few more perennials into the tropical garden this year.  That’s one less thing to worry about and I’m sure I’ll find something else to overdo elsewhere in the garden.  Right now as potatoes and onions come out of the potager I’m fighting the urge to fill the beds with a succession crop of flowers, or use the space for excess perennial seedlings.  One year, that’s the goal I have for keeping the new beds in vegetable production rather than turning them over to flowers again, and we will see 🙂

Sunflowers on a Sunday morning.  It may be hot and dry, but it takes a lot before sunflowers  complain.

Hope you’re enjoying the fruits of your labor, and even if the weeds are starting to win there’s always plenty of good out there.

in my spare time