I’m finally back in the garden after missing three of the last four weeks due to work commitments, and it feels good.  All the guilt and regret is washed away (both trips were sort-of voluntary) and I’m pleased to see the plants have mostly fared fine without me.  That’s a good thing of course, even if it does cut my ego down a bit to see how well things did without me there giving them a daily once-over but sometimes if you love something you have to set it free… Good enough in theory, but here the weeds really took advantage of the freedom and over the next few (ok, weeks) I hope to address that.  In the meantime closeups work, and they’re so much nicer than the other set of photos which were going to show all the challenges and struggles ahead in this weedy garden. 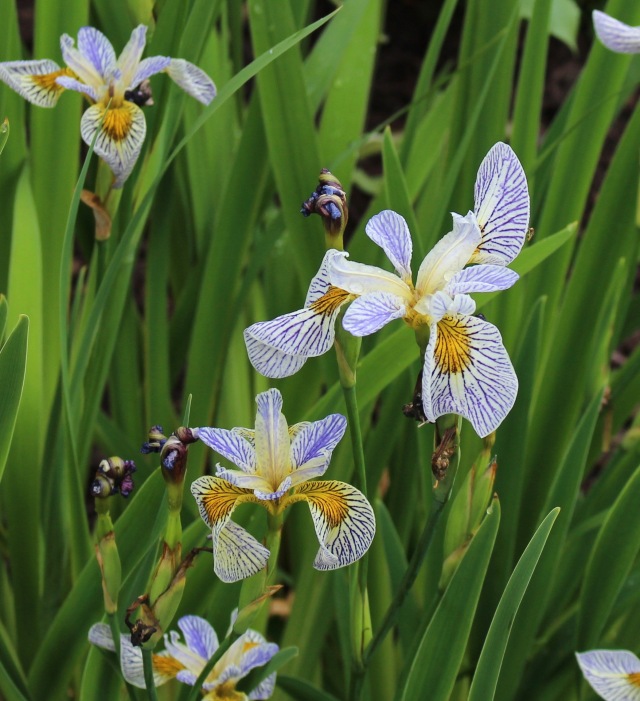 Iris ‘Roy’s Repeater’, one of the interspecies cross iris which I’ve been mildly obsessing over for a couple years now.  Maybe I still have room for another three or four…. I do like the pale yellow ones 🙂

I got in Friday night so it wasn’t until Saturday morning that the tour happened.  Then it was coffee on the porch and a lot of thinking.  Needless to say I was in no rush to get working and even less of a rush to do the important things first.  That is unless you think staking the delphiniums is the most important thing which needs doing, because that’s were I started.  It was light work, just right for getting into the swing of things and getting the nails dirty again.  Funny how the most noticeable thing about being away for two weeks is that your nails get normal-person clean. 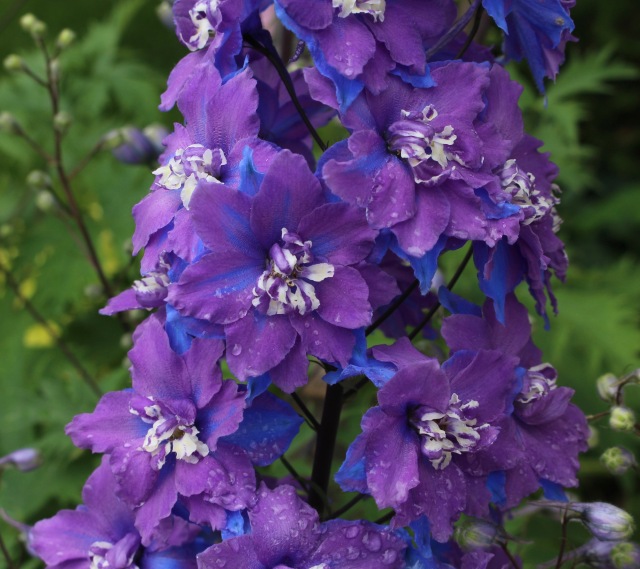 The first of the delphiniums, staked just in the nick of time.

After staking I weeded along the front porch.  That’s kind of cheating as well since the bed is so full few weeds stand a chance, but it was a start, and now at least I can sit out there without a heavy conscience. 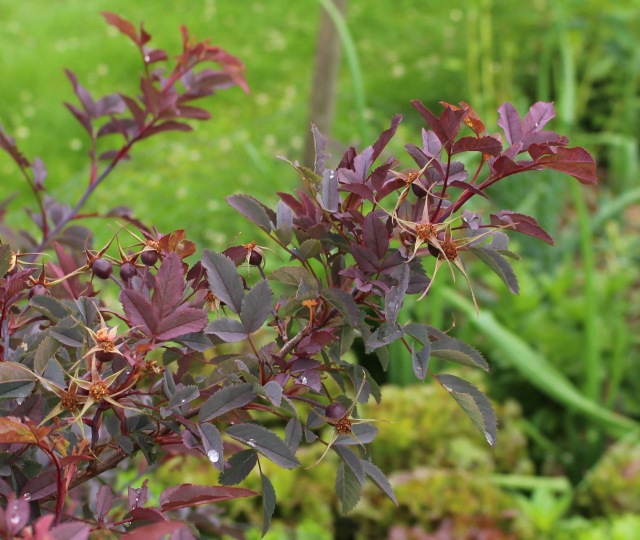 The spring foliage of Rosa rubrifolia is nice enough that the flowers don’t even matter… which is a good thing since they’re so tiny.

With a little weeding under my belt I gave a little more thought to what needed to be done next.  I decided the best thing for me to do was go to the nursery.  It’s been a while and I didn’t want them to worry.  Plus if I do get around to weeding it’s a terrible idea to leave all those empty spots, they’ll only grow more unwanted weeds.  Better to fill the gaps with new plants. 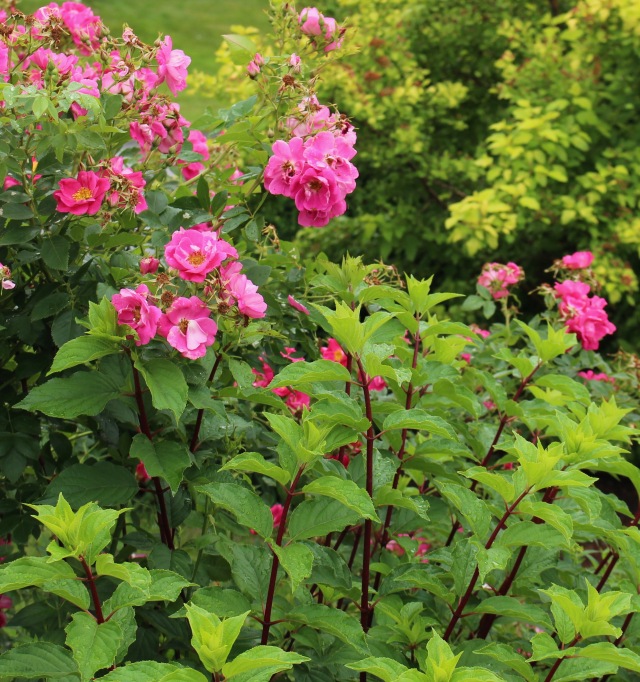 Hydrangea ‘Strawberry Sundae’ is coming on very well this year and I like how the red stems look against the ‘William Baffin’ rose… which is a blooming beast this year!

I spent way too long at the nursery and if you’re counting I may have spent way too much money as well.  It wasn’t easy but I’m trying to stick with my new self-improvement plan which includes me being a force of social change.  I wasn’t buying all those plants for myself, I was buying them to support my local nursery.  I was buying them to build up the little guy, to keep dreams alive, to encourage someone to have a nursery yard full of obscure interesting plants ready for me to buy whenever I need a plant fix!  I could have been weeding my own garden but instead I chose to go out and help make the world a better place.  You’re welcome. 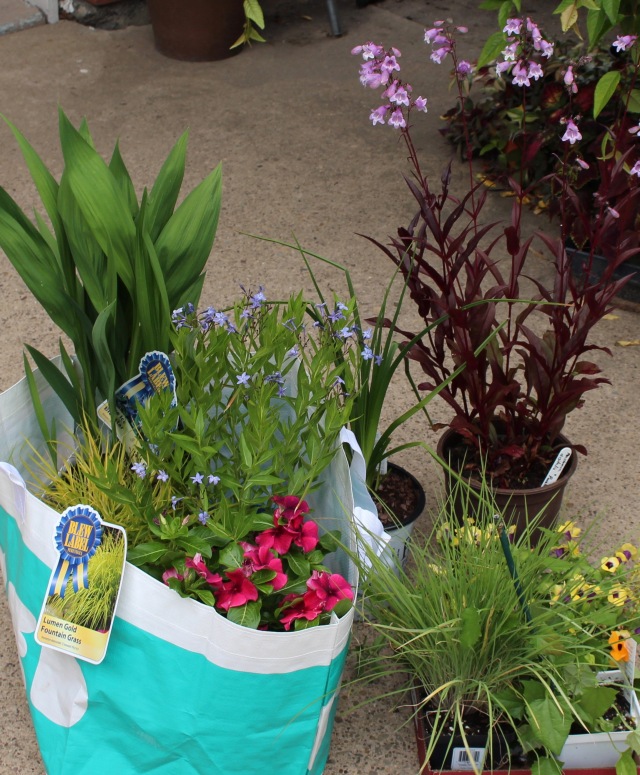 I may have said I don’t need any more plants with yellow foliage.  That was foolish.  I still needed a yellow fountain grass, ‘Lumen Gold’ to be precise.

The plants were crammed in right after lunch.  Well actually there was a pool visit first and a lot of child throwing as well, but fortunately there was still enough energy left to scrape a shallow hole and bury a few root balls.  I’ve decided that plants need to realize quickly that it won’t be an easy ride around here, so tough-love planting is the new rule.  I do take care to break up the root balls as much as possible though.  The sooner those roots get out of their potting soil, and into their new soil the better.

So that was Saturday.  Sunday was father’s day and weeding was again pushed on to the back burner, but because someone also has a new ‘all purchased plants must be planted within three days’ policy it wasn’t a complete day of rest.  I spent a good two hours setting up the deck containers.  That sounds busy, but if you’ve ever watched it’s more moving plants and considering than it is planting.  I’m never really happy when it’s done, but once things grow in it always ends up looking good enough. 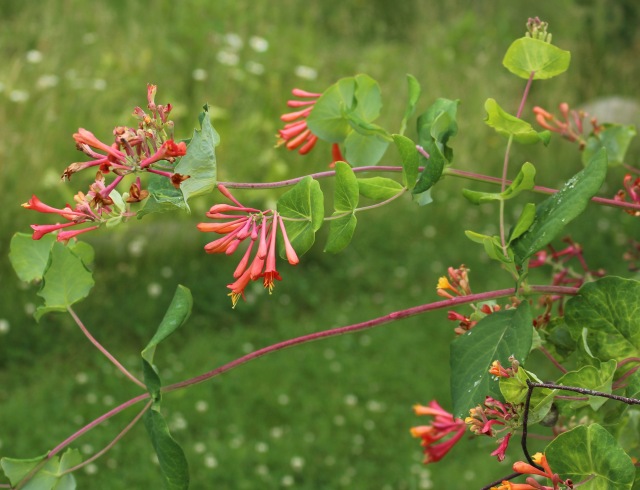 The honeysuckle (Lonicera sempervirens) has been entertaining the hummingbirds for a few weeks now.  Aphids can be a problem but I just ignore them and the distorted growth (lower right) they produce.

I spent the rest of Sunday puttering.  I was happy to see plenty of bugs but little plant damage, and I like to pretend there’s some kind of good and bad balance thing going on but experience shows it’s not likely to stay that way all summer. 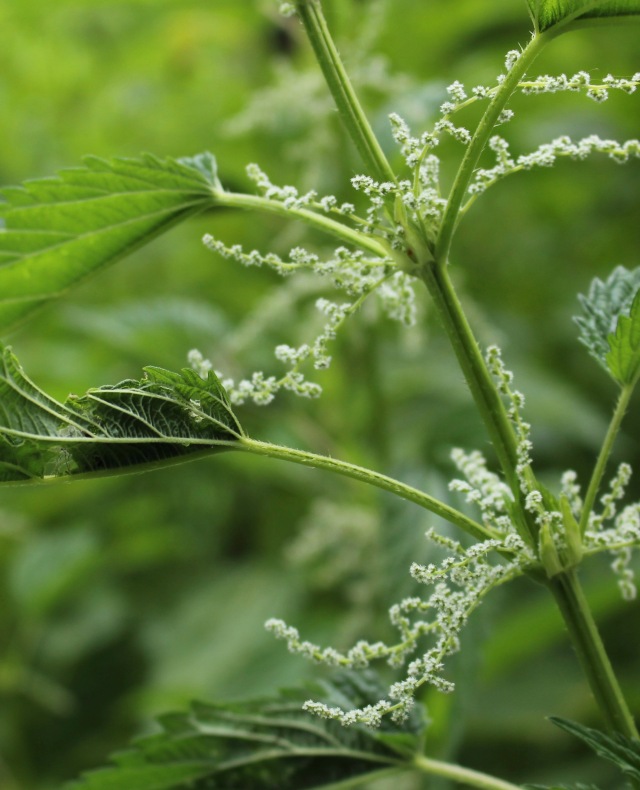 Stinging nettle has been tolerated and even encouraged in the back reaches of the yard.  The stinging thing is relatively harmless and cool, but even better is when the leaves start folding up around the red admiral caterpillars which this plant supports.

One animal which always surprises me are the garter snakes which have moved into the arborvitae next to the porch.  There are two, and surprisingly enough they enjoy draping themselves across the branches and catching the morning sun when things are cool.  Not everyone agrees they’re good company but I like them. 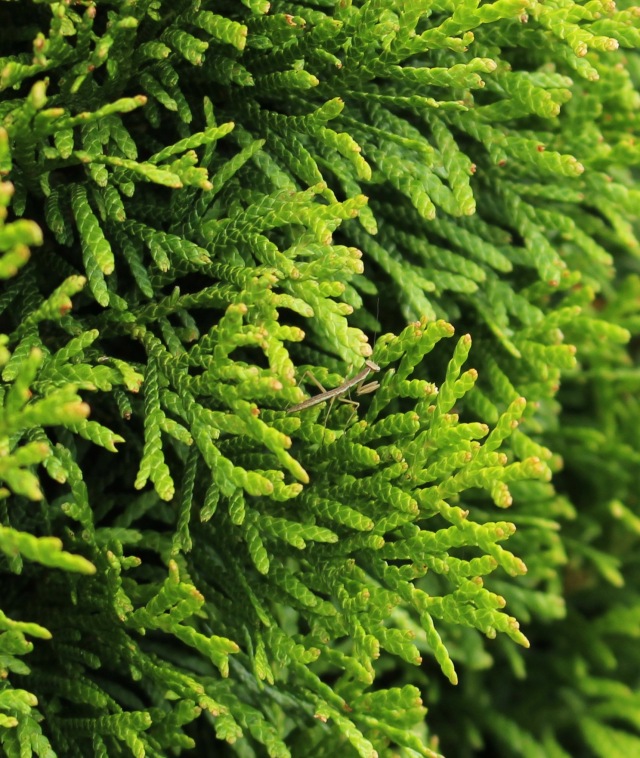 I was hoping to get a photo of one of the snakes but found this praying mantis instead.  I don’t think I’ve ever seen such a tiny one before.

The rabbits and an on again off again woodchuck are other wildlife which are making themselves known, but there’s one native wildflower which is really announcing itself this year.  Jewelweed (Impatients capensis) loves the regular rain and its juicy little stems are showing up everywhere. 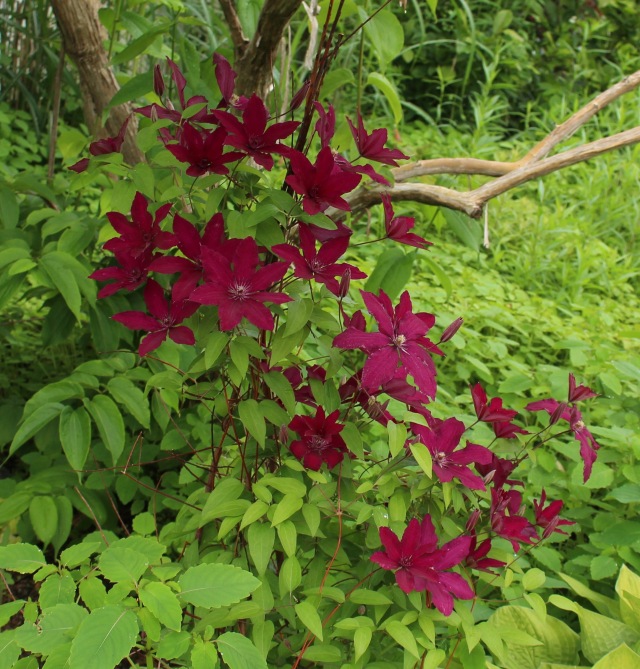 Clematis ‘Ruutel’ rising up from a sea of jewelweed.  Easy enough to remove, but there are other plants anxious to get out from under their shadow.

I think that’s enough from me.  The on again, off again drizzle suggested I call it quits for garden work and I was fine with that.  Taking pictures is much easier than weeding anyway.

Quaking aspen out in the meadow. 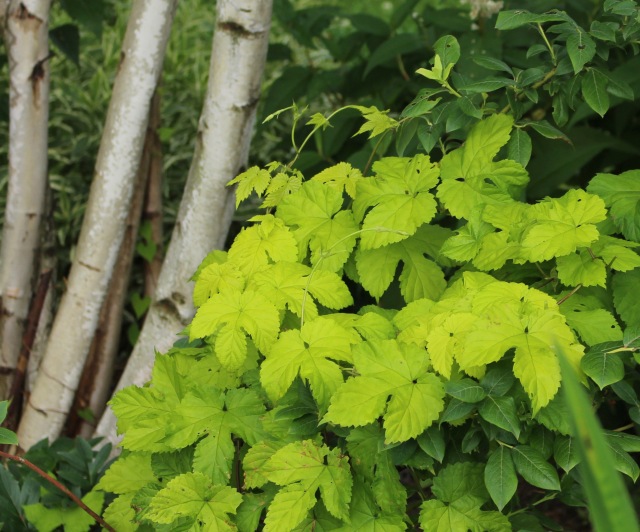 Golden hops looking for some support to scramble on up… someone should probably address that. 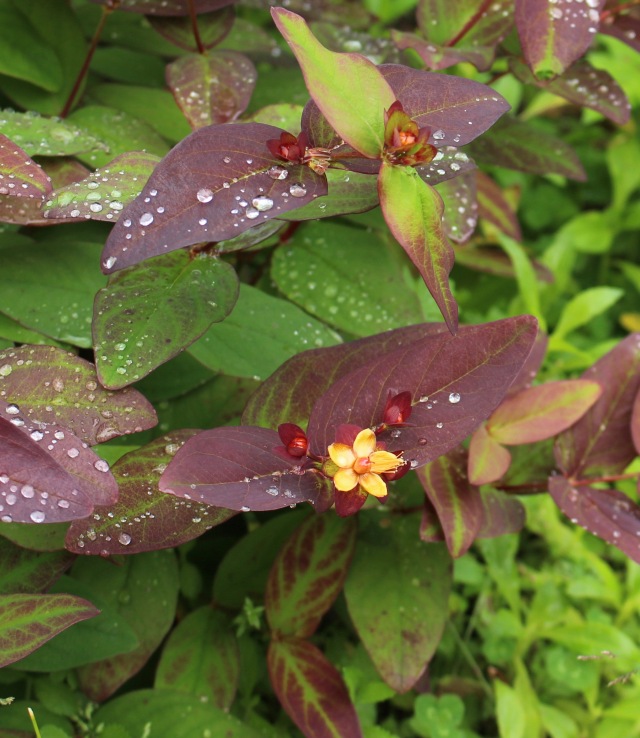 Hypericum ‘Albury Purple’ living up to the name. 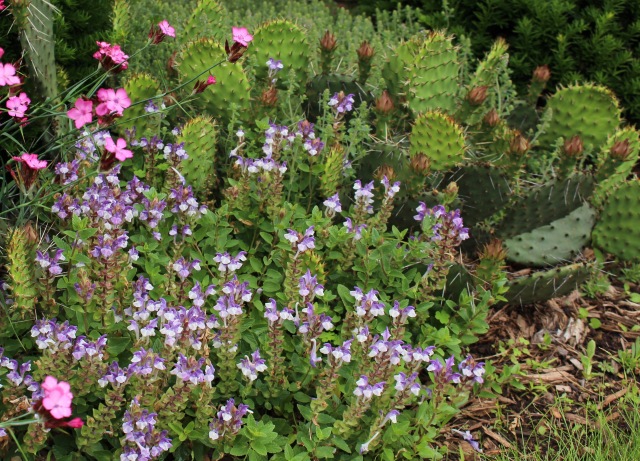 I know the lavender colored flower is a Dracocephalum but the cactus has grown over the label and I’m just not curious enough about the exact species to brave the spines. 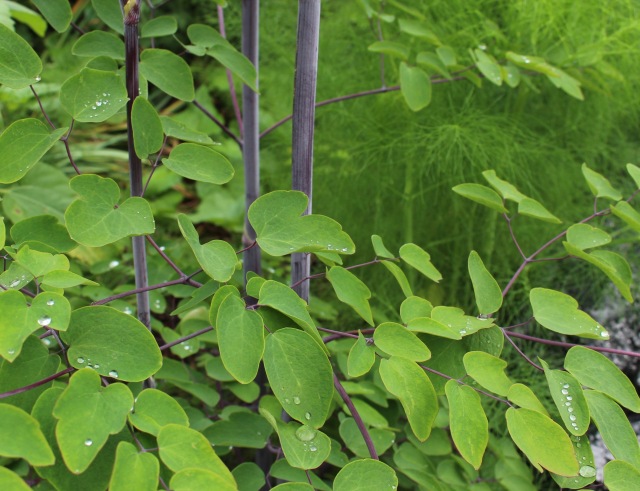 I love Thalictrum rochebrunianum.  The foliage is cool enough, but with the dark stems and their waxy coating it’s just a work of art. 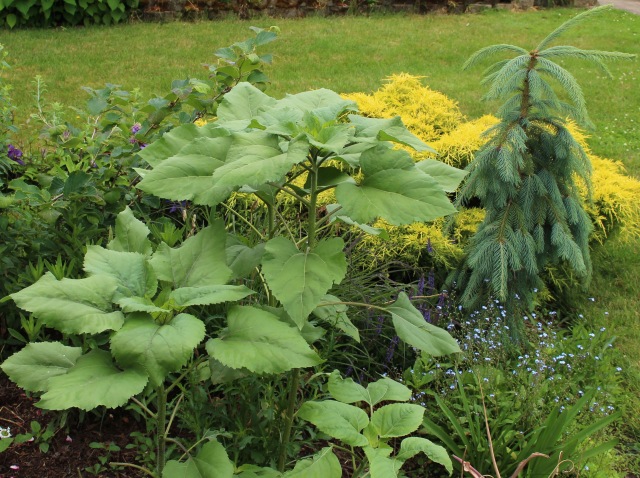 So much for weeding out these sunflower seedlings… 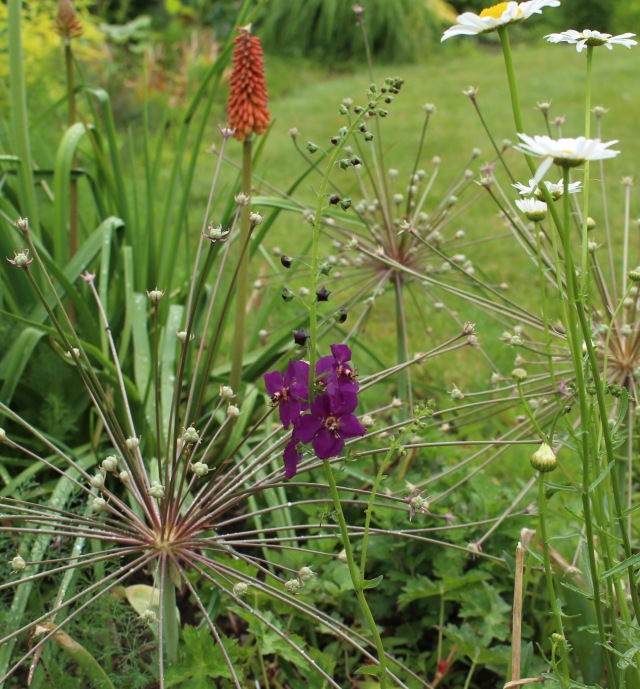 Verbascum atroviolaceum is a small floppy verbascum which only flowers in the morning and isn’t all that showy, but of course I think it’s cool. 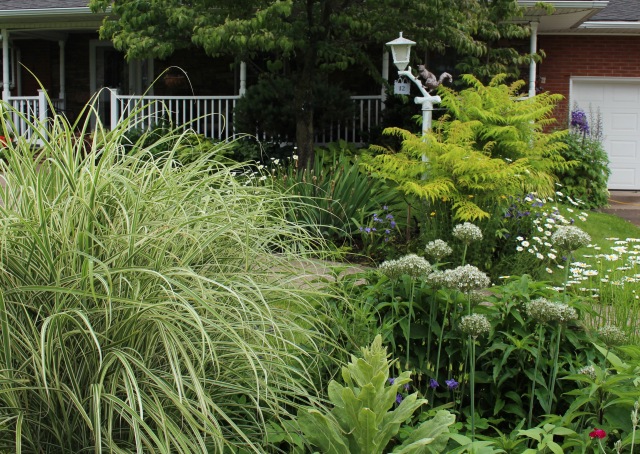 The border along the street is just doing its own thing this year.  We may run a purge but if it ain’t broke don’t fix it…. says the gardener who will end up trying to fix it. 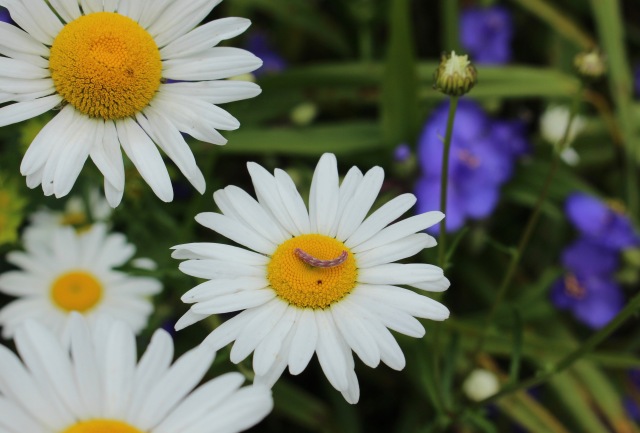 One of my favorite weeds is the Oxeye daisy, this one complete with a colorful inchworm. 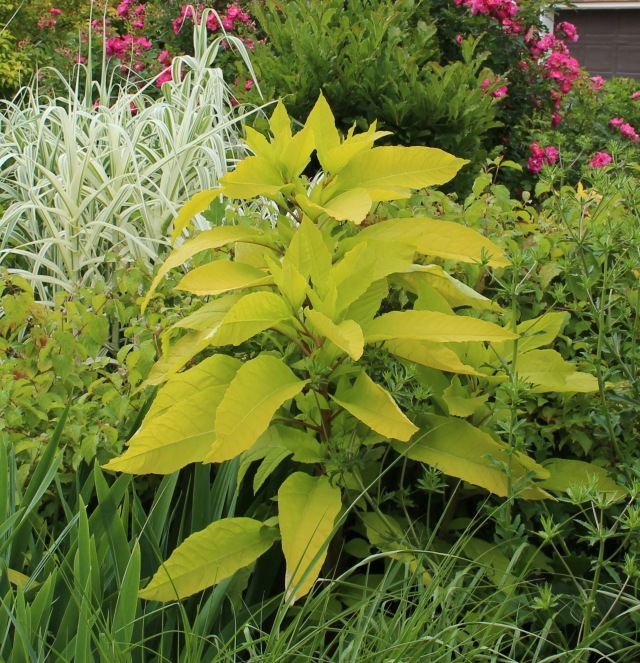 Growing native plants is a noble cause, but once you start planting cultivars things get iffy.  I pull out plenty of the regular pokeweed, but apparently ‘Sunnyside Up’ has now entered the local gene pool… and is too pretty to pull 🙂 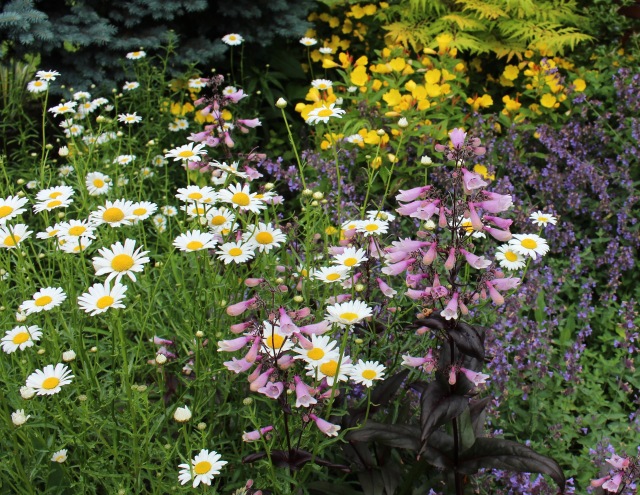 The foundation planting has exploded into June color, and I’m wondering if these might not be the perfect meadow flowers to plant across the berm.  Penstemon digitalis ‘Dark Towers’ with Nepeta ‘Walker’s Low’ and Oxeye daisy again. 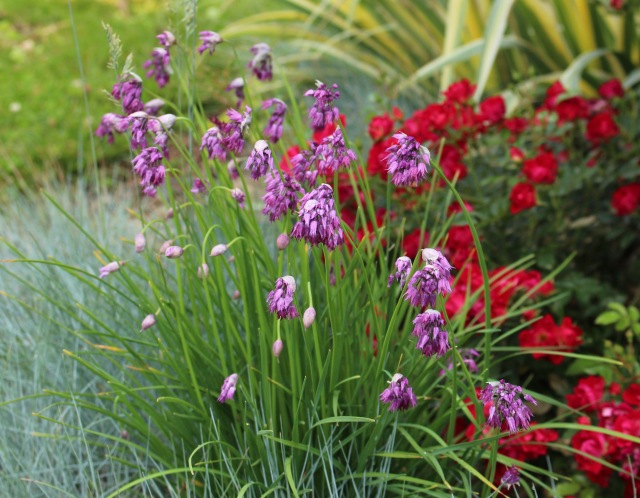 Allium narcissiflorum with a red carpet rose in the background.  I like this little onion! 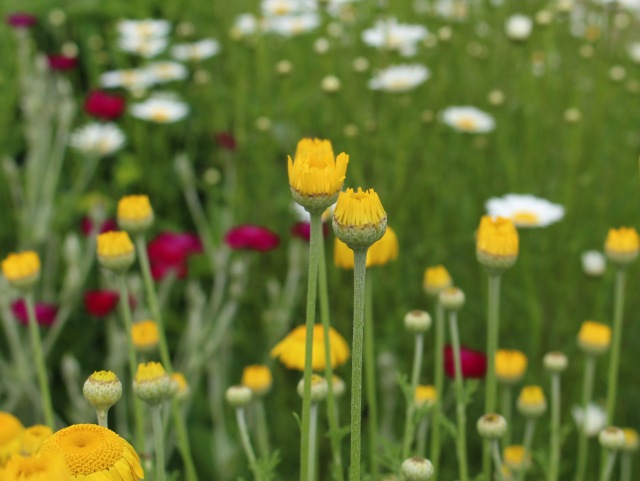 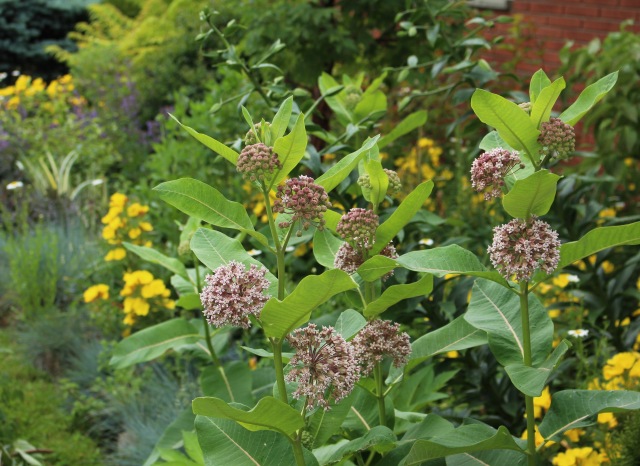 Common milkweed (Asclepias syriaca) trying to take over the world (or at least the front foundation bed).

So that’s it from here.  Maybe it’s messy, maybe I’m not getting much done, maybe the weather is a little cool, but as long as you remind yourself it’s not January it’s all good 🙂

16 comments on “Ready For My Closeup”

From The Mountains To The Sea