In hindsight the weather could have been better for the two hour plus drive down there, but when you’re matching up three busy calendars you sometimes just get what you get.  Fortunately for the most mountainous part of the drive the bulk of the snow hadn’t yet arrived, and for the flatter portions the thermometer was beginning to rise.  At least it was pretty to look at…. I guess…

A slow, careful walk up the icy drive gave plenty of time to admire the witch hazels.  I believe this is Hamamelis x intermedia ‘Diane’.

We really had to squeeze this visit in because John Lonsdale, Edgewood Garden’s proprietor, was busy loading up trays and packing the truck for the Pine Knot Hellebore festival in Virginia which kicks off this weekend and then runs for the next three.  Lucky you if you’re close enough to visit, but for now the seven and a half hour drive is more than I’m willing to consider… you never know though.  It’s on the bucket list.  >click here< for exact dates and locations of this and other Edgewood sales events. 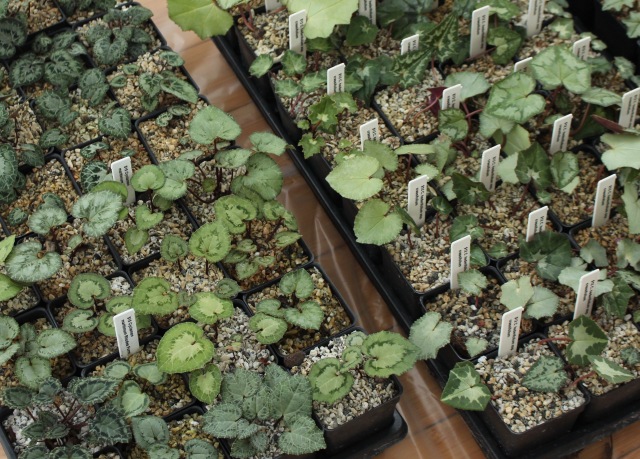 Cyclamen ready to hit the road.  Such awesome foliage you almost forget they also cover themselves with bloom, C. maritimum on the left wouldn’t be hardy for me, but I could easily pick out at least four or five of the C. hederifolium to the right and they’d do just fine here in the mountains 🙂

My friend Paula met up with us and we had a great morning looking at and talking about just about any and all snowdrop nuances you could think of.  Then we talked about cyclamen.  As usual I overstayed my welcome.

John and Paula working their way through the G. plicatus section of snowdrops.

I honestly intended to take pictures of some of the latest and greatest hybrids and named sorts and share the photos here, but I really do get a little overwhelmed when hit with the variety of species John grows.  If you’d like a more focused report I’d recommend clicking >here< to read the recent Washington Post article on Edgewood Gardens and some of John’s work with several of the rarest snowdrop sorts.

Just one of the many pots which made me say “oh look at this one, I like that too”.  I believe these were all G. gracilis seedlings.

Of course I like galanthus for the flowers as much as anyone else, but for some reason the varied foliage of the snowdrops had me distracted on this visit.

Curly thin foliage, flat wide foliage with a grey tint, wide apple green…  This photo shows some of the range in Galanthus foliage.  G. gracilis mostly but also a few other species such as G. plicatus and G. ikariae subsp. snogerupii…. a name which I can never resist saying 🙂

Various pots of Galanthus ikarie seedlings.  Such nice foliage, some big flowers here and there, and even one with a nice flush of green on the petal tips.

There weren’t just a few species.  I asked which ones in particular he had growing in the greenhouses and his response was just “all of them”.  It was very cool to see, but even that was overshadowed by the thousands of snowdrop seedlings coming up on nearly every spare shelf or extra rack.

The incredible diversity of species coming along is staggering but before I was even able to get myself grounded again it was off to the next greenhouse to check in on some hardy cyclamen. 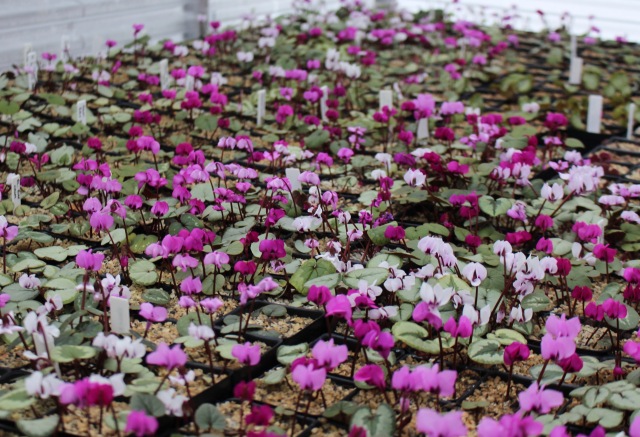 Cyclamen coum filling the bench with an exceptional range of forms and colors.

I took this visit as an opportunity to correct the severe lack of cyclamen coum which my indoor garden is dealing with this winter.  For those who need to know, my budget only allowed me to pick four new ones, so you needn’t worry that I made a huge dent in his offerings.

Cyclamen coum ‘Porcelain’, a nicely striped special strain he had coming along, as well as a particularly dark form below it.

Speaking of budgets, since last year was such a success in restraint and control, I’ve decided to leave off on a good note and never mention tracking my gardening costs again.  It seems almost pointless to worry about a few dollars here and there when I’m faced each month with writing the checks to put a ten year old girl through gymnastics.  All my gardening budget is now officially part of my health care budget, and that would be mental health specifically.  Spending money on the garden will hopefully distract me from the endless drain of money going towards filling birthday cards and financing icecream shoppes and filling the belly of a twelve year old boy who always seems inches from famine.

Another Edgewood offering this year, ‘Orange Glow’ winter aconite (Eranthis hiemalis).  I could have easily added a few of these to my order, but have to keep faith that my little seedling from a previous year is still just waiting to show itself.

As long as we’re talking about the budget I wasn’t going to talk about, I might as well admit this visit wasn’t all just the usual me inviting myself over to look at plants.  John has put out a spring listing of plants and I may have needed to pick up a few snowdrops as well as my new cyclamen.  It can be found >here< and although I did save on shipping by picking up directly, you may choose to avoid a five hour roundtrip through snow and icy roads, and just have them mailed to your doorstep.

A large flowered Galanthus plicatus seedling.  The rule of thumb here is about one inch for that particularly fat digit, and that puts this well endowed snowdrop at over two inches!

As always it was a great time, and even though the walk out went even more slowly with precious cargo in hand, we still took a few more minutes to again admire the optimistic witch hazels lining the drive. 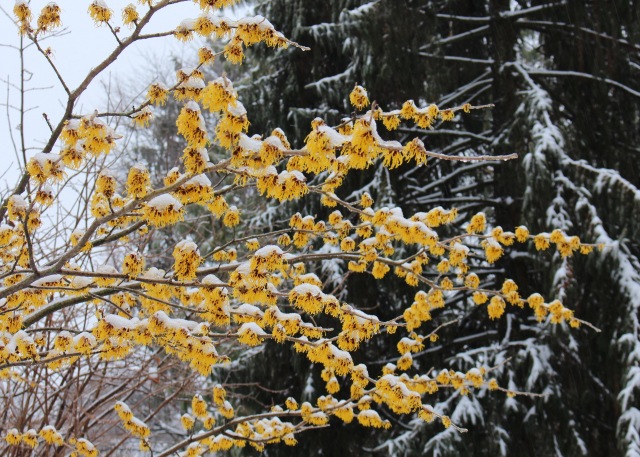 Icy witch hazel (Hamamelis × intermedia ‘Barmstedt Gold’) in full bloom despite the sub-freezing temperatures.  Everyone should have a few of these.

Thanks all around, and since this post is starting to sound like a shameless plug for Edgewood gardens (which it is) I guess I should say I received no compensation for it, and as a matter of fact it was actually a little costly even if you don’t count the stop at IKEA on the way home.  Well on second thought that’s not completely true.  On a previous visit John gave me an ‘unsellable’ cyclamen which had a few yellow leaves.  It’s now growing and blooming beautifully in its new home, so maybe that cyclamen was all just part of some elaborate master plan 😉

Have a great week, and judging by the strength of the sun this morning you can probably guess what my next post will feature heavily!

30 comments on “A Return to Edgewood”