It’s been a wonderful spring with reliable rain, even temperatures, and no extreme weather.  This is enough to spoil a gardener and make him forget the usual drought and plague which usual hit about this time of year.  Delphinium would be my poster child for weather gone wrong, and in a normal year would lay in a storm beaten heap well before the end of June. 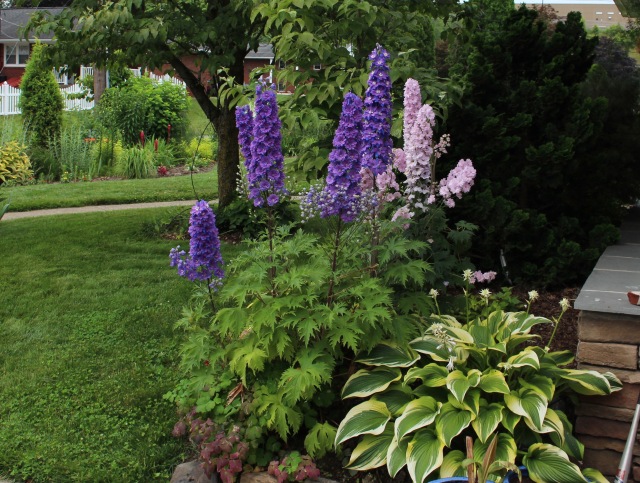 The delphinium this year have been exceptional.  Even though this photo is a few days old they’re still gracing this corner of the porch with two foot long trusses of (still upright) bloom.

So I couldn’t help but gloat a little over the delphinium, but the real point to this post is to show a little of the backyard and hopefully impress someone with how busy I’ve been.  There’s a whole other garden back there and sometimes my limited attention span never makes it past the Tuesday view of the front street border 😉 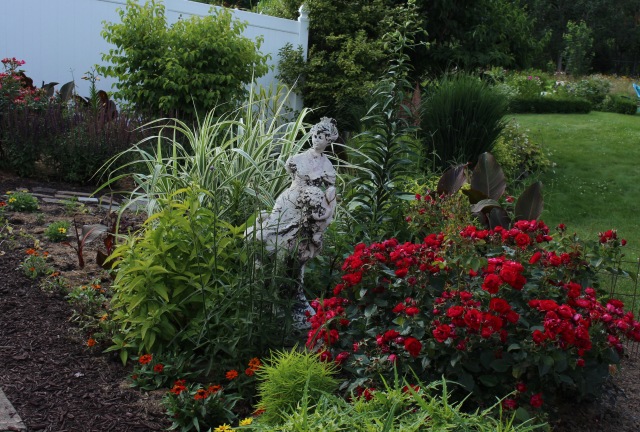 First stop is the tropical garden alongside the South side of the house.  Our neighbor has stopped commenting about the “black, dead eyes’ which she sees every time she looks out the kitchen window.  I’m guessing she’s either finally lost her soul to the Queen of the Prairie statue or she’s too distracted by the overwhelming awesomeness of the ‘Black Forest’ rose.

Once into the back yard the most prominent feature is the kid’s play set.  It may look romantically functional in photos, but in reality it’s become too weak and shaky, and not quite what 9 and 11 year olds look for in outdoor entertainment. 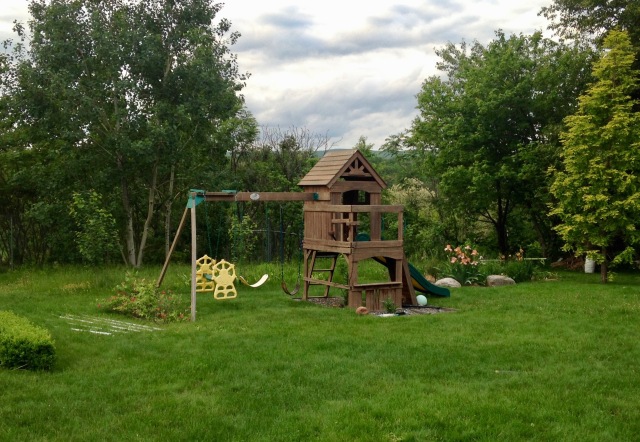 Nine years of noble service but at this point I’m worried a kid will come crashing down through a weak floorboard.

An executive decision was made to retire the play set. 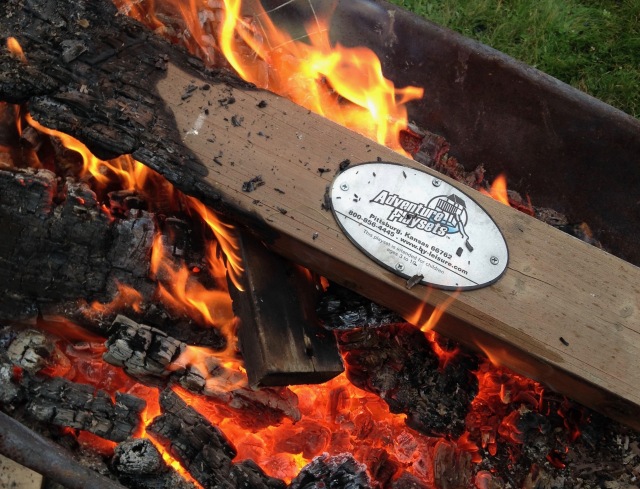 The end of an era.  I remember opening the carton on the day we bought it and thinking, mmmm all cedar… some day this is going to make a cozy bonfire… I guess that day has finally come.

Between ripping down the old set and figuring out what to do with the site, several weeks passed.  Another executive decision determined that the budding gymnast needed a bar to do acrobatics off of, so off to the internet.  In the meantime summer came. 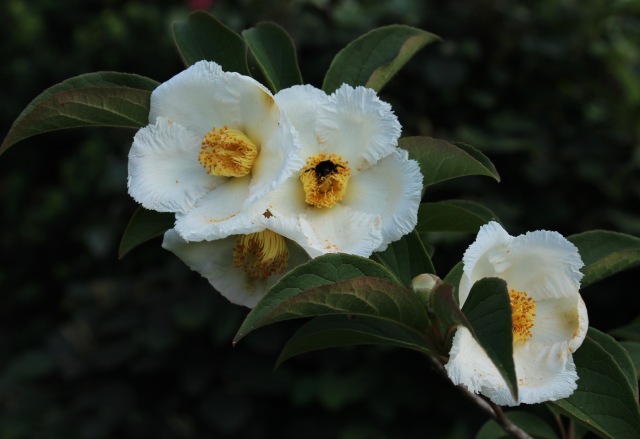 The stewartia tree is fantastic this year and surprisingly enough the native bumblebees are as thrilled with this Japanese (or Korean, or Chinese… not really sure) tree’s flowers as I am.  You can see a bumblebee butt sticking out of the middle flower.

While working out the swing project (which as expected became much more complicated than it should have been) I also tried to triage the vegetable garden and back flower beds.  For as wet and cool as the spring was, the phlox came up terrible this year.  Spider mites, stunted plants, missing clumps…  I blame miserable soil prep and last summer’s drought, but who knows.  I did finally fertilize, and things appear to be turning, but as I realize once again how great they should be, I kind of regret not taking better care of them. 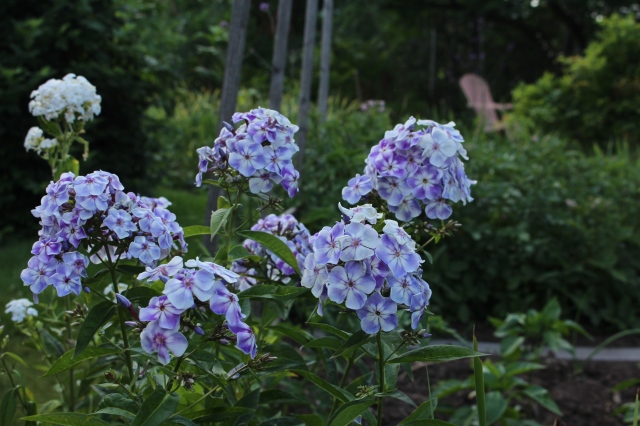 Phlox ‘blue spot’ is one which did get a little extra care.  I couldn’t ignore this one, I just moved it onto the list of favorite phlox… which isn’t as impressive as you’d think since it includes almost all the phlox I have!

Even though the phlox patch (aka vegetable garden, aka potager) is really just an overdone example of gardening gone wrong, it only takes one amazing flower to make it all right.  Some Regal lily (Lilium regale) seedlings from a few years back are big enough to flower and I love them.  The flowers are nice enough in themselves but in addition to color, they perfume the entire potager with a heavy scent of summer which reminds me of gardenias and the tropics.  Too much for an enclosed place, but in the late afternoon, out in the garden, perfect. 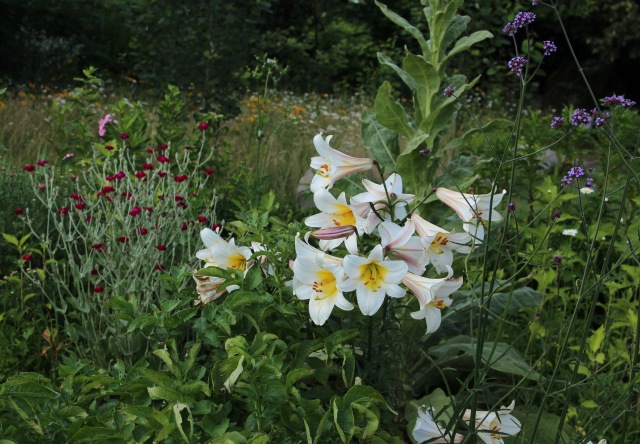 Regal Lily in full bloom.  I would qualify them as ‘easy’ from seed, just as easy as all the other “volunteers” which fill the bed.  A less generous eye would say lily in a weed-patch but as long as the weeds flower…

While the garden slowly comes together, the new swing set also rises.  An idea comes to mind, no real reason why it shouldn’t work, new parts, wrong parts, returned parts, and a whole lot of sweaty digging while the price tag goes up and up. 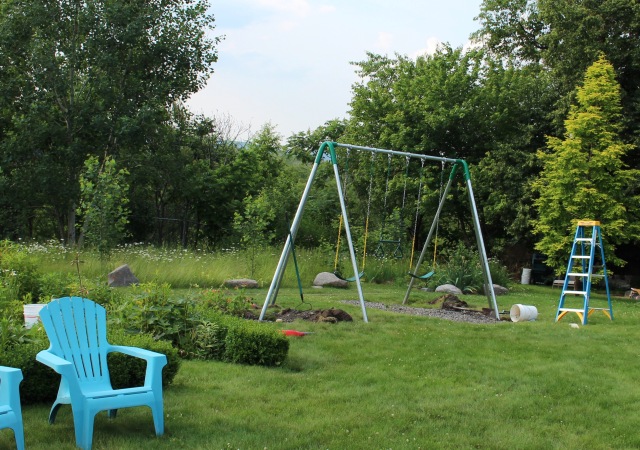 An industrial swing which can even handle the occasional daring adults.  Once it all came together it wasn’t that bad, the real work was removing the gravel, filling with dirt and sod dug from elsewhere, and of course digging a new planting bed 🙂

As the old swing went down, the annual ‘cut that damn grass it looks horrible and it’s full of ticks and don’t you care about the children’ discussion took place.  In an attempt to distract naysayers and define the area I nearly killed myself moving a few mini boulders over to define the edge of the meadow.  I like it and of course think it looks even better, but as for other opinions… I’ll let you know as soon as we’re back on speaking terms. 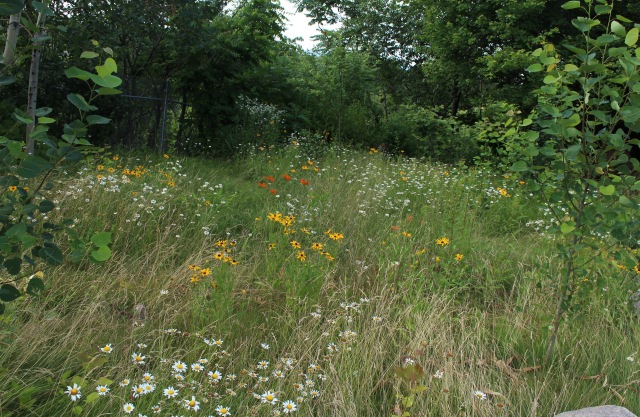 End of June meadow.  Daisies ending, rudbeckia and butterfly weed coming on strong, but I’m not sure if the aspen saplings will stay or go.

To be honest bugs do abound in the meadow.  There are fireflies, butterflies, crickets and bees galore, as well as visitors of the cottontail type. 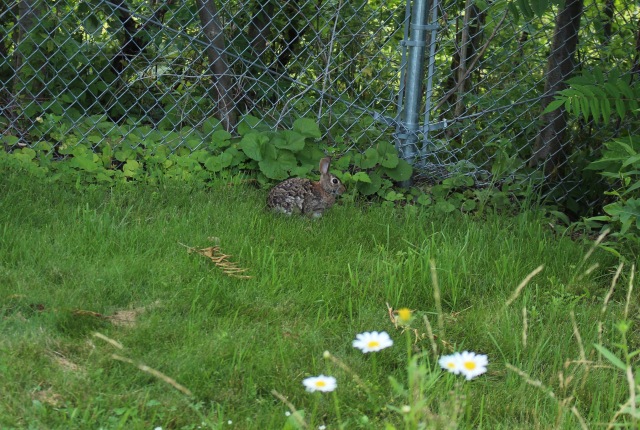 Eastern cottontail rabbit.  They do damage, but over the season it’s still much less than a single deer or woodchuck could do in one night.  I have a soft spot for the bunnies, and have been known to carry on conversations with them, so I guess their company is worth the beheaded broccoli and mowed down lettuce.

While I was trying to figure out how the old swing set could so quickly collapse and be outgrown, it’s beginning to sink in that it’s the actual years which are ticking away.  It’s already been nine years since we moved to this house. 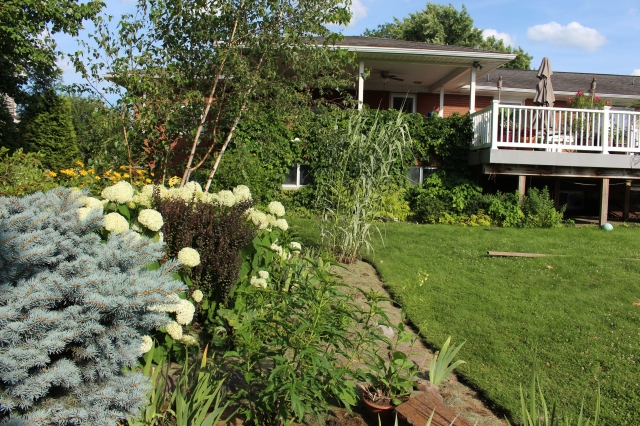 A backyard view.  Nine years ago only lawn spread across the yard and up to the house.

But you really can’t do anything other than enjoy the ride.  We now have a cute little swing set for relaxing afternoon entertainment and it will hopefully provide many years of fun. 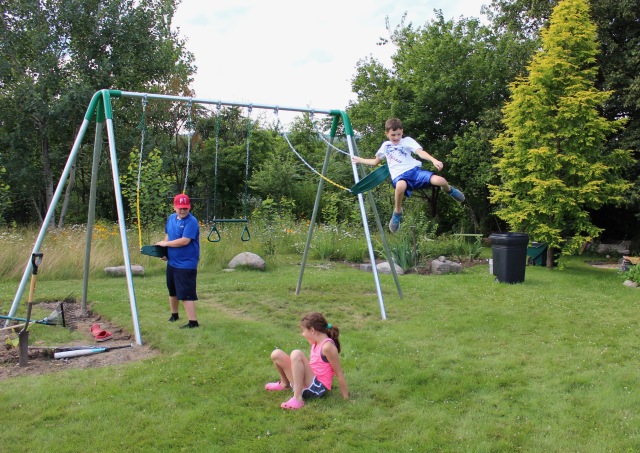 It took them all of ten minutes to figure out how much more fun jumping is compared to more sedate back and forth swinging.  As of tonight no bones have been broken so let’s hope that luck holds.

The pond is next.  It’s been a ball-trapping, mud-slopping, weed-filled pit for more years than I care to admit, and is absolutely overdue for a detox.  Every year I say the same, but I hope that once the potager is weeded, and the new swingset bed planted, and a truckload of bark mulch spread, and daffodils dug, and out-of-control compost pile reclaimed… I think then I’ll start on the pond.  Maybe.

11 comments on “Around Back”

in my spare time

A Room With A View
Wave Hill Blog