The last few weeks have me drowning in the color of spring bulbs.  They’re not the fanciest varieties and they’re not laid out into the most exquisite vignettes, but they are bright and to me they’re just about the nicest explosion of spring that I could imagine.

Perennial Darwin tulips in the vegetable garden.  I keep threatening to evict them in order to make room for tomatoes, but tomatoes can wait and for now this is something you just can’t buy at the grocery. *photo credits to my wife for this one.  The spring color lured her out as well… in spite of allergies!

Every summer I make an attempt to reclaim the vegetable garden and every spring it seems like the bulbs are multiplying faster than I can dig.  The daffodils are carefree, but even the tulips make a go at it, and I think the summer baking in thin, heavy soil is really what they seem to enjoy.  If only the vegetables did as well.

The area more commonly known as the “Potager”.  To put minds at rest I’d like to proudly announce that the center bed actually now contains vegetables as well as a few blooms.  The seed potatoes finally went in this week.

Not to paint myself as some greedy, plant hording ogre but here are the tulips which were supposed to end up next door in my brother in law’s yard.  At the time it sounded like an extremely noble gesture, this selfless donation of extremely fat tulips to someone else’s garden… but then I had second thoughts and into my own garden they went.  Looks like my petition for sainthood will still face a few bumps in the road. 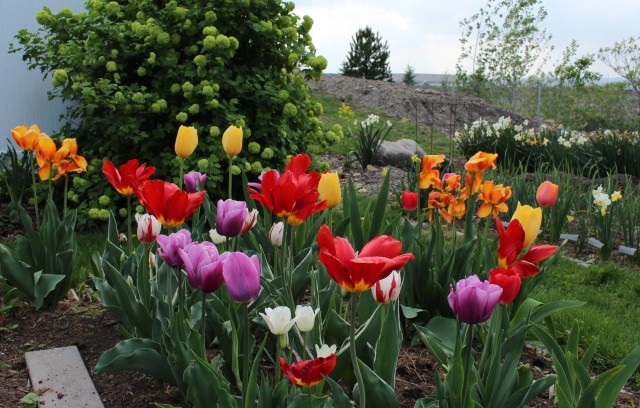 The orange tulips were already here, but the purples, reds and whites were newly planted from a bag of ‘mixed Darwin tulips’.  They’re nice enough, but as it is with these mixed bags from a big box store they’re not Darwin tulips, and they’re nothing like the photo on the bag.  They are colorful though.

Another issue with my sainthood (other than still being on the living side of the divide) was that I actually pulled out a few tulips from this mix which were deemed too ugly to stay in this garden.  This was horribly judgemental on my part, but the tulips were a grossly congested, small white multiflowering thing and even though I would have never thought I’d ever see an ugly tulip, there they were… 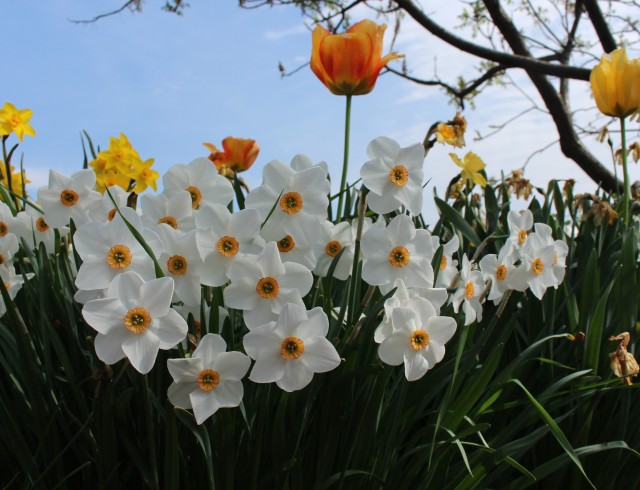 The beautifully pristine narcissus ‘Bright Angel’.  The early and midseason daffodils may be over but these are still just perfect!

While the tulips are taking the spotlight there are still plenty of daffodils.  This is the tail end of the season, and the late varieties are really welcome as the others begin to fade. 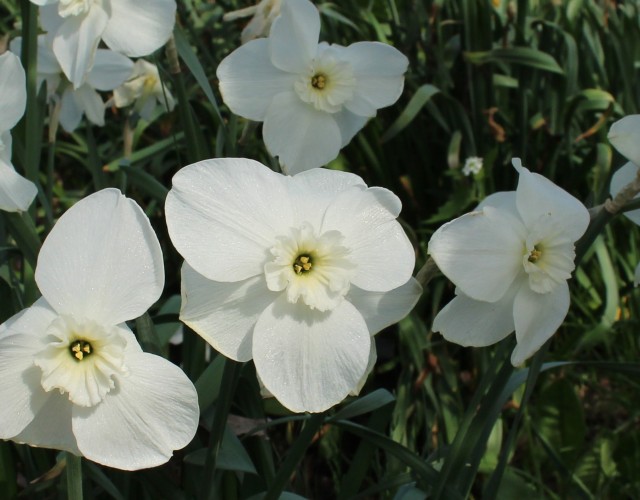 Narcissus ‘Irish Linen’.  A clean, pure beauty which has stood up well to the wind and changing weather.

For this little slice of Pennsylvania 2017 has been an excellent daffodil season.  Occasional rain, reasonable temperatures and no brutal freezes have reminded me that these bulbs can be overwhelmingly awesome, and I’m almost ashamed to admit I considered entering a few flowers into a daffodil show.  What kind of fanatics do things like this!?  The closest would have been a two hour drive each way and me being a complete novice I just couldn’t rationalize my way into it.  For now maybe I’ll just rejoin the American Daffodil Society and consider a try in 2018… that sounds entirely reasonable. 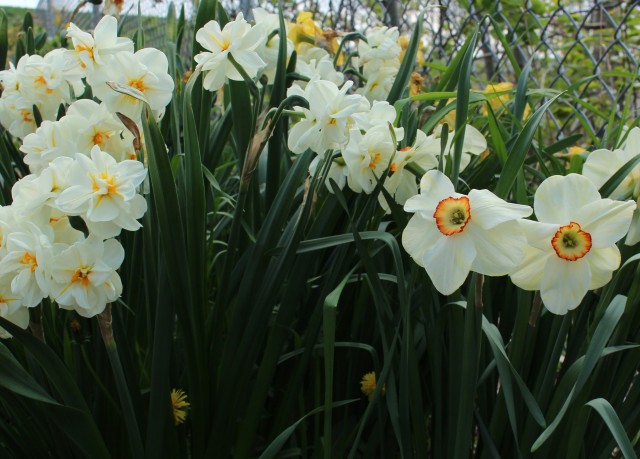 The fragrant double ‘Sir Winston Churchill’ on the left with ‘Requiem’  to the right.  Both deserve more recognition than that of a passing rabbit or lone, wandering gardener.

Looks like we will have to wait and see what happens.  Spring is such a busy time and I hate to lose a full Saturday during primetime, but for some reason it’s tempting.  Must be that attraction of spending time with equally crazy plant people, I think that’s what always gets me 🙂

‘Requiem’ again.  The Petals have a lemony flush to them which I love, and the small cup looks so perfect.

Daffodil shows or not, one thing I definitely need to still consider is the call for adoptive parents for the many extras which fill the bulb beds.  The beds are packed and I need to get rid of hundreds of bulbs from old favorites to heirlooms to newer varieties.  Please leave a comment if you’re interested in any,  all it takes is the price of postage.  Please.

Narcissus ‘Mission Bells’.  This one deserves a little more room but…

Now I really can’t justify the next flower.  Double tulips are gross wads of colorful tissue paper stuck onto the ends of pipe cleaners and pen ends.  Completely lacking in class and of course just what I need more of.

A few years ago I planted a ‘Magic Carpet Mix’ of double tulips and I’ve been digging them each summer and moving them around trying to find just the right spot for them.  I’ll let you know if I ever succeed.

I admit I do like tulip monstrosities.  The singles are so plain and elegant it’s nearly unstable of me to want anything else, but I do, and I know next year will see a few more doubles and probably a few of the twisted and distorted parrots as well.  I think the only oddities I don’t like are the fringed tulips.  It’s probably good to draw the line somewhere. 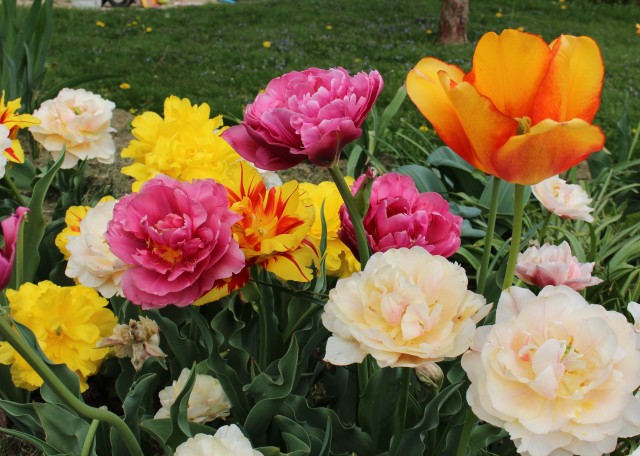 It’s not all bulbs here, there are a few other treasures here as well putting on a nice show.  As this is my 9th spring here I’m starting to wonder where all the billions of seedlings I start each spring go.  I kill thousands, and another million are annuals, but here and there I’m starting to see a few nice perennials joining my garden.  Not as many as you might hope for or expect, but it’s still a fun trip.

Here’s a bleeding heart from seed.  The seeds were labeled as being from ‘Valentine’ and the plants do have darker stems (which have faded in some warmer weather) and the red flowers of its parent, but as for growing it from seed I can’t give any reason other than you can and I did 🙂

One group of seed-grown plants which is almost a problem now (since I keep starting more and more each spring) are the primroses.  A few of the tougher types such as the polyanthus and veris (cowslips?) types are building up decent clumps, but I’m still pretty sure they just tolerate my garden and aren’t really that thrilled to be here.  I’ll take what I get though and for now they’re worth the extra trouble of watering.

Although most of the other types (mostly the p. aucalis and wanda types which usually show up at groceries in the spring) die off during the summer, but eventually I hope to find a few others which aren’t too much trouble.  Granted “too much trouble” is a very relative term if it’s something you really, really, really need to grow! 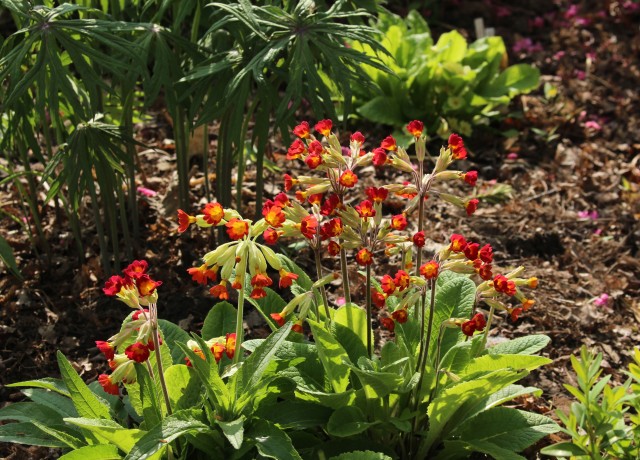 Okay, I’m already distracted by the bulbs again.  As we move around to the front yard the Camassia are blooming in the front foundation bed.  I love them but they flower so quickly, especially if we get a few hot days.  By the way these need to be divided as well, so if anyone wants a couple dozen… 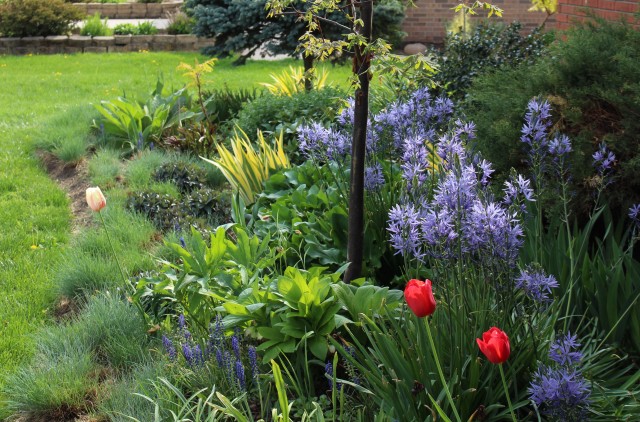 The foundation bed with blue camassia and (in my opinion) a very nice blend of foliage colors and textures.

More tulips.  The “Incendiary Collection” from Scheepers is flowering in the newest section of the front street border and I’m more than pleased with it.  The mix is a blend of three colors but even for the gardener who planted them it looks like a mix of two unless one looks really hard.  No problem though,  all I notice is the bunches of perfect color and the…. well really, the tulips are the only thing I notice.

A $40 splurge on 80 bulbs.  They weren’t even on sale and if I were the introspective type I’d wonder why I bought them and how I rationalized it after saying earlier “no new tulips this fall”.

Actually I did notice one other thing.  Still tulips, but they’re a much shorter and more subtle version of the group.  It’s tulip “Green River” and they’ve come back nicely for a second year.

Tulip ‘Green River’.  I’d call this an orange sherbert color and although it’s not as showy as the others I still think they’re cool.  Don’t overlook the variegated foliage, it’s another subtle touch on a pretty little tulip.

Spring is moving fast so it’s really best to soak these things in while you can, and believe me I’m trying.  The house has a ton of projects which should be getting done but whatever.  I’ll leave you with a parting glimpse of the front yard tulipomania.

Hope spring is going great for you as well.  Have a wonderful weekend!

23 comments on “A Mayday Celebration”