2016/17 been a remarkably mild winter in this corner of Pennsylvania, and although February usually brings us some of our harshest cold and winter storms, this year it’s going out with a whimper.  For a few days I won’t complain but beyond that I can’t promise anything.  March has a history of big snow-dumps and hopefully if they do come they’re more picturesque than they are damaging, and hopefully this quirk of a winter is also not some dark prequel to an even worse global warming future.

Without a solid slate-cleaning this winter I’m a little lost heading into the 2017 gardening season.  It all still seems so ‘last year’ so I suppose I’ll use that as my excuse for not putting out the usual bored with the snow, don’t want to face the cold, winter time flashback posts, but let me at least try and get this one post out before I’m lost outside again searching for spring sprouts.  It goes back to 2002 when the ignorance of youth thought it would be a good idea to buy a house, lose a job, and get engaged all in the same two months. 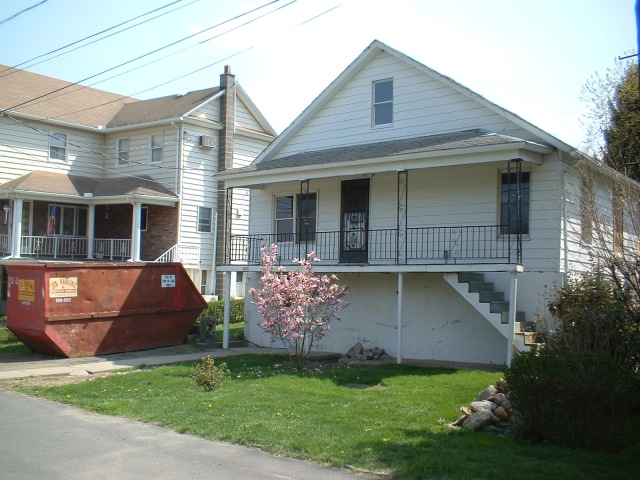 Our diamond in the rough.

Before I get too distracted with the story I want to point out that a normal first impression of our little valley usually dates it at around 20 years behind the rest of the country.  It’s a region who’s boom time began at the tail end of the 1700’s with the discovery of vast deposits of anthracite coal; the cleanest, hardest, and highest carbon coal out there, and the fuel which powered the economic and manufacturing development of this entire region.  For about 100 years we were riding high but it was a one horse show, and by the 1950’s the horse was definitely showing its age.  Deep mining had shifted to strip mining and the whole region went into a kind of long term hibernation of fleeing youth and aging residents.  Our house is an example of the ‘build it quick for housing’ phase and was probably built around 1910 as cheap two family housing for miners.  After decades of rough living it was probably worth our $24,000 purchase price.

100 years of history and the yard didn’t even have a peony or daffodil.  Gardening was confined to an overgrown privet hedge which looms to the right and a single mass of lilacs growing alongside a decaying shed.

I optimistically brought all the potted plants over from my former apartment balcony and then later watched them freeze as first the plumbing and then heat and finally electricity were pulled out and replaced.  In case it’s not obvious from the photos or purchase price the house was in horrible condition, so much so that when the realtor’s odd girlfriend took her small dog into the house and allowed it to pee on the kitchen doorjamb it barely raised an eyebrow.  I guess we were too distracted by the rotted floor boards, cobbled home repairs, and ‘evidence’ of vermin infestation. 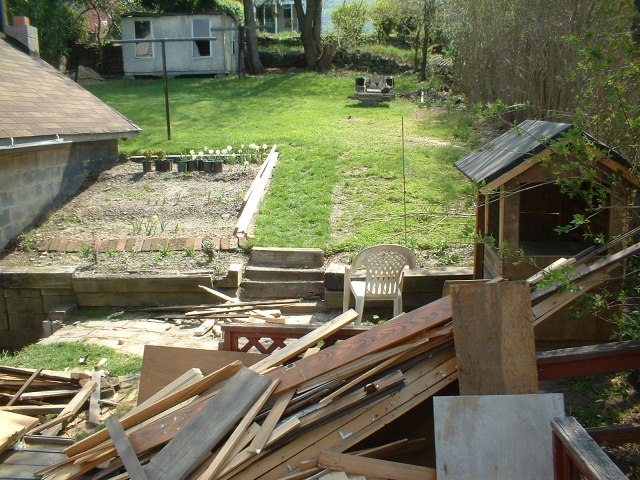 That fall I planted daffodils, and in between gutting the house and piecing together scraps for a rabbit hutch, put in the first patch for gardening and trimmed back the near side of the privet. oh yeah, and actually transplanted grass so that I had at least one nice strip of lawn to walk on.

As I’m very fond of saying, ignorance is bliss, and for several months the economic realities of the newly unemployed demanded that I just “polish and put a shine on shit” and hopefully have a resale value once the journey was done, but a former girlfriend now fiancée had different ideas.

I have no idea why I had to have a waterlily even when I didn’t have a running toilet, but there it is.  Until the next dumpster arrives, what better use is there for a 1960’s avocado green bath tub?

After several months of basement and utility renovations the friend who’s a contractor is traded in for the actual deal.  We’re into new territory now and although I can’t pay my labor in cases of beer anymore there is progress.  Unfortunately real contractors can’t be bothered with sensibly small attic dormers, they prefer “it’s cheaper to rip it down and build solid walls” and so we did. 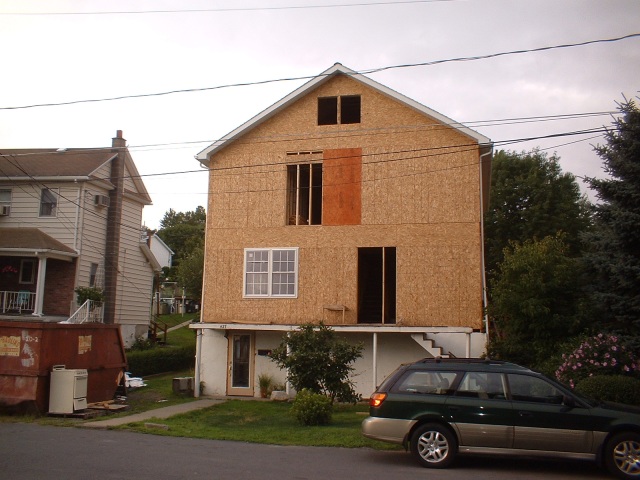 About a year later.  Might as well add a second floor while you’re at it.

So here we were taking a two family home (which likely housed close to a dozen people at one time), tripling it in size, and making it just large enough for the two of us.

Looks quaint and country, but keep in mind that a freight rail line runs just behind the trees, and only a few years ago a garbage truck collapsed into the road when an old mine shaft gave way.

Still unemployed, and now enrolled in school (again) the ballooning “don’t worry about it, I’ll take care of the kids”, pricetag finally scared me off the very addictive drug of contractor help.  With windows in and siding set to go on we cut the cord, buttoned up the exterior and moved into the basement… and found out what it is to live on love 🙂

Building from the bottom up.  What were we thinking!?  In hindsight it’s hard to believe all of this was the product of me in the basement with a few sheets of graph paper and a lot of ‘yeah, I think I want another door here and window there… and oh, probably another bathroom’.

Obviously there wasn’t all that much free time for gardening, but you know how it goes with all work and no play…

Of course there’s not much to the garden in October, but the privet has bounced back from its trim back and another bed is in.  Not really a garden design, but these beds take care of the pathetic grass which it replaced.  Please note the ever popular burn pit where most of the old house’s lumber was illegally burned.

Once we moved into the house the next three years are kind of foggy.  A full kitchen came first, a completed first floor, a new job, a master bedroom, a new baby, a completed second floor… finally an attic loft.  Slowly the garden inched along as well.

Behind the garage became a new garden spot where iris divisions were welcomed.  You can’t beat the generosity of other gardeners for filling in bare patches.

To know me is to know I have a slight leaning towards the tropical flair.  I love how you can get a massive show in just a few short weeks. 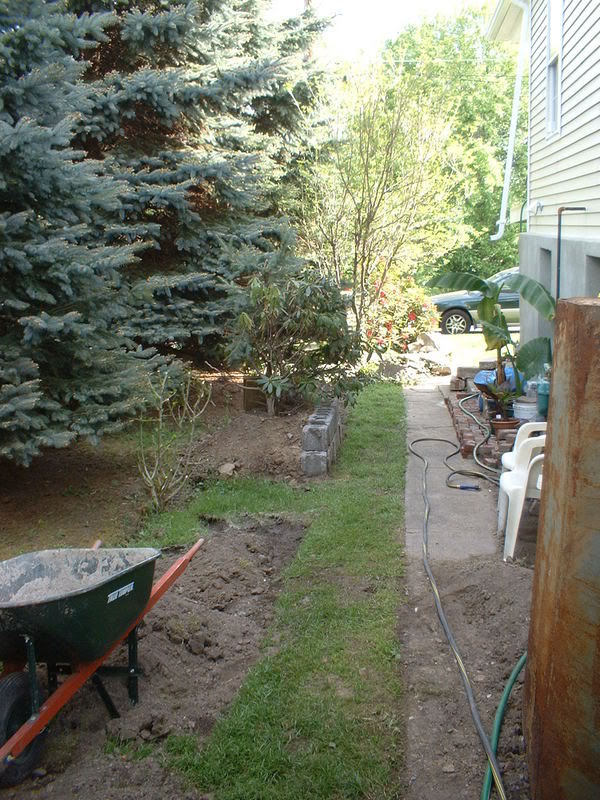 The usual leftovers and scraps which are my constant struggle.  Someday I’ll get them under control… or move to a new house 😉

The fun of a new garden is you have room for nearly everything and don’t yet have the baggage of too many beds gone to weeds, invasive plants, or “shouldn’t have put that there” issues.

I am a bit of a creature of habit.  Ten years later and I’m still growing all of these tropical and tropical looking goodies. -and I still like too much red

Another big plus for this house was that pretty much everything we did was a blessing -considering the property’s history of troublesome kids, giant rats, and overflowing trash piles.  Construction debris, dirt piles, unfinished projects, were all overlooked in this neighborhood where it’s not unusual for people to live and die in the house they were born in.

The front garden never really had time to come together.  I would have loved a small picket fence or something.

We were on a different track though.  Memories were built, lessons learned, and dreams ignited but when it came down to it this wasn’t more than a stepping stone.  Five years into it (just as the last big projects were finished) we decided to buy the house of my wife’s grandparents.  It was an unexpected decision based mostly on emotion, but in the long run we knew this would be short term.

A very helpful addition to the garden.  From the start he was practically an expert in finding worms and digging up new transplants.

So that spring I focused on grassing over a few beds, moving a ton of plants to the new house, and getting the house set to go on the market.

The new view out the back door.  I wish I had better pictures of the seating area carved out of the back slope, but as usual I was distracted by lounging out on the deck.

So that was what brought us to the new house.  In what has become our normal mode of operation for life changing events, that spring we were hit with a tsunami of the house selling in three days, a baby arriving a month early, a job lost, a car totaled, all made even more fun when you decide a few changes to the “new” house might be necessary… but we survived and it really puts the panic of a late frost or snapped iris stalk in perspective.

Don’t worry, we shall return to our normal garden updates next post.  I’ve just taken a look outside and the snowdrops are coming and the snow is melting and as soon as 2017 is off and running I won’t give a darn about years gone by until winter rolls around again.  Hopefully the weather is looking up for you as well!

31 comments on “Getting Roots in the Ground Again”