The tough go elsewhere…..  like south a hardiness zone or two!

Leaving the below freezing temperatures behind for a couple hours doesn’t make me a quitter, right?  It was only a day, and when a friend and I worked out the details some cold, snowy, January night, the idea sounded like a great one.  It was, and the adventure started off with a two hour drive south to her place. 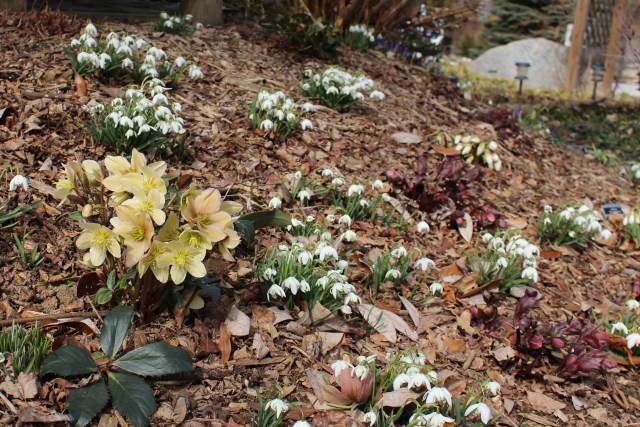 My friend admits to being a galanthophile and since I might also be drifting in that direction I suppose it’s only fair I warn you ahead of time.  There will be plenty of snowdrop pictures. 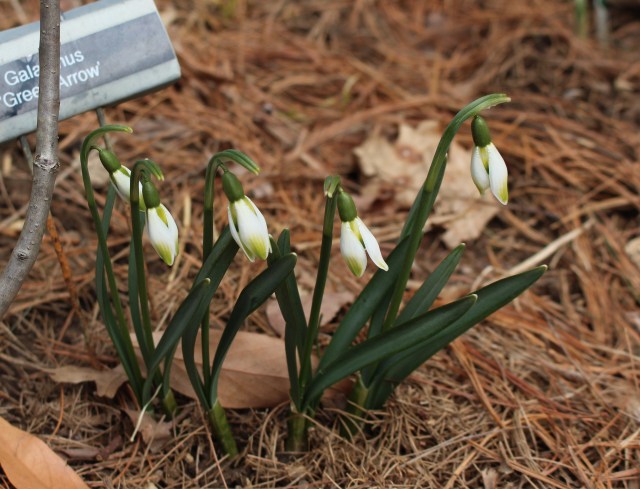 Snowdrops with a touch of green on the bloom are always a little different. Galanthus ‘green arrow’ looks nice enough, but I of course am still in my big-and-fat-is-better stage.

I tried to resist hinting too much that I wouldn’t mind one of nearly all of them! 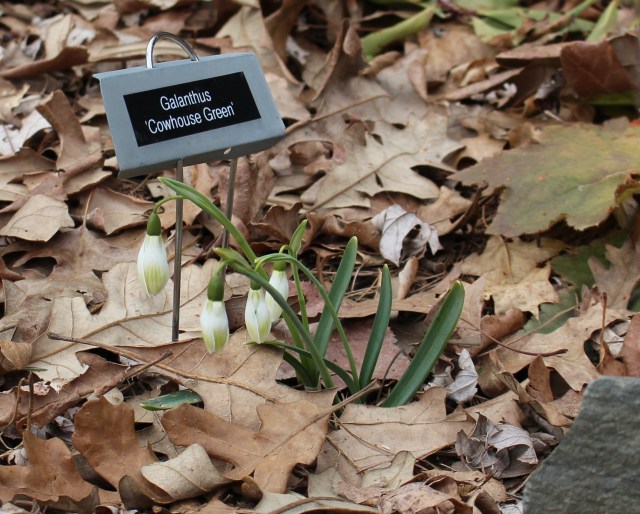 Here is a snowdrop with a green blush, which is how I like my greens best.  A good guess on the name would be galanthus ‘cowhouse green’.

What can I say about a fantastic clump of yellow? 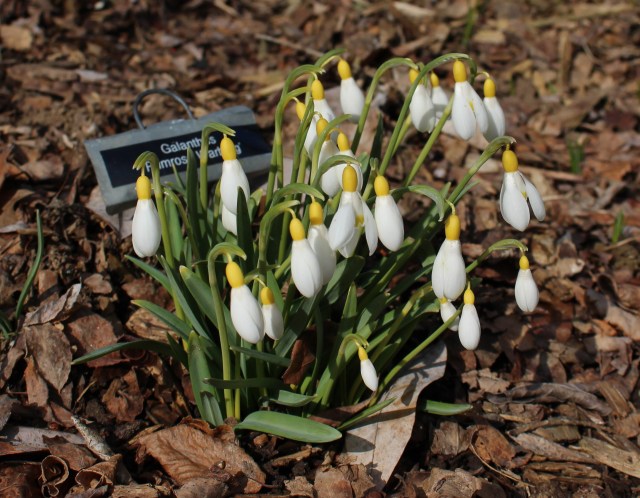 This was a long garden tour.  We talked about the different varieties, where they were growing well, what seemed to be doing best, and what we still dreamed of getting our dirty little fingers on!  It was a great visit, and it’s not that often I can mention snowdrops in every sentence and not get some kind of sideways glance or a poorly concealed eye roll. 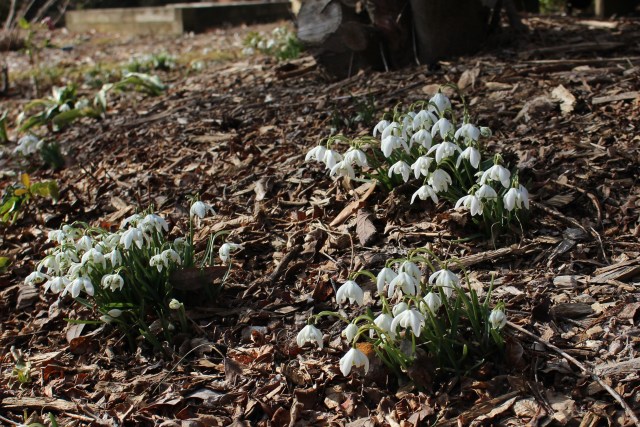 We came to the conclusion that the common double snowdrop, galanthus ‘flore plena’, is among the best drops for making a nice display in your garden beds.

Of course one cannot live on galanthus alone, so the supporting trees and shrubs also called out for attention.  Here’s one which caught my eye and caused a little bit of inner conflict at the same time.  It’s the willow-leaf spicebush, and after a bright show of autumn color the leaves hang on throughout the winter.  I thought I despised trees and shrubs which play the trick of holding on to their dead leaves (fancy term for this being marcesence), and would never have considered adding it as contrast and winter interest, but I found it oddly appealing and might have hinted towards a few seeds or a cutting or two someday.  What do you think of it? 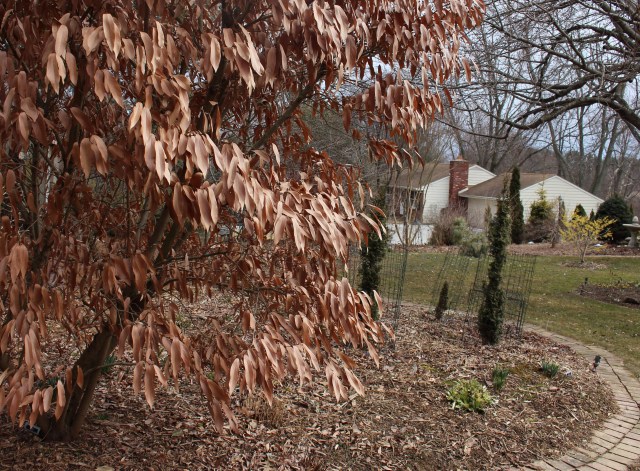 Not the best picture, but it shows lindera glauca’s smooth khaki winter foliage. According to my host it will all drop off (making a mess?) once the buds break.  Hardiness is zones 5-7 according to what I found, so it should be ok in my frigid garden.

How can you resist a late winter carpet of blooms with crocus studding the lawn? 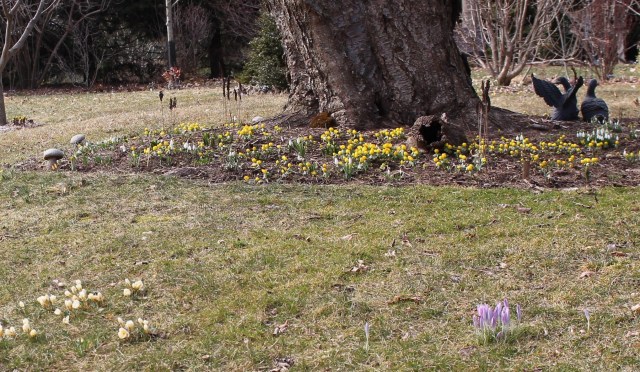 I loved this old cherry tree underplanted with a carpet of late winter bulbs and snow crocus naturalized in the lawn. A perfect view for right outside a window.

The garden tour (and lunch of course!) were only the start of our adventure.  We jumped into the car next and set off to a nearby abandoned farmstead to check out the naturalized drops there.  Clearly a different setting than my friend’s garden! 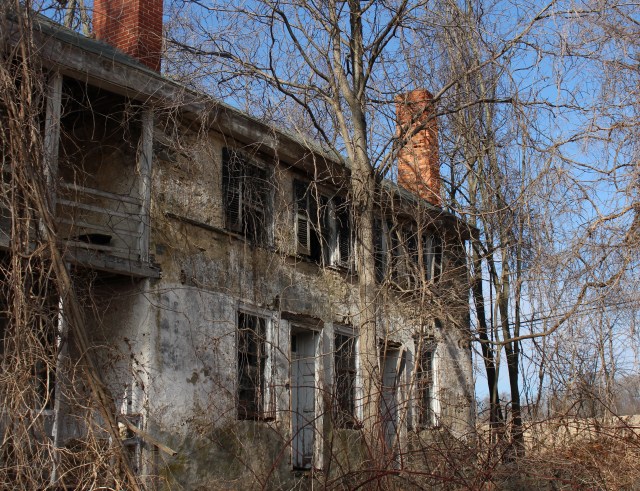 Your standard abandoned Pennsylvania farmhouse, all grown up and over with invasives like locust, bittersweet, and multiflora roses.  General decay all over but I was impressed by how well the chimney brickwork was holding up.

Back in the day I’m sure this was a completely different place, and while investigating the property my friend found she actually knew one of the former occupants.  It was a different place back then, one where children were being raised, lives were being led, and someone planted a garden.  A garden which likely contained a small patch of snowdrops at the doorstep, a patch which during the years of abandonment has spread. 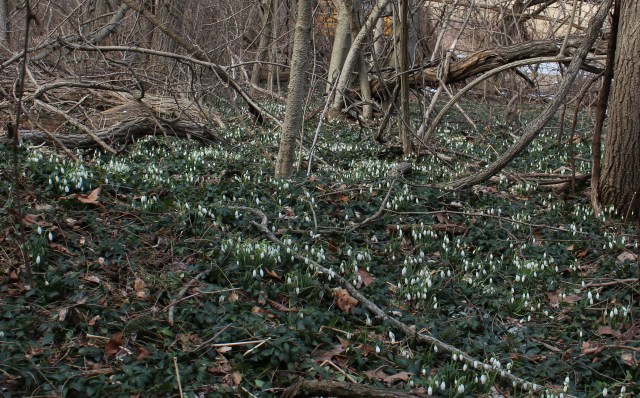 Filling in between the house and street, naturalized snowdrops between the weed trees and vinca. They look cold because they were, and even with warmer air temperatures the ground was still frozen solid.

Naturalized snowdrops spreading over the years look even better when paired with a few decades worth of winter aconite (eranthis hyemalis).  Throw a few cyclamen in and you’d think you were at one of the great estates! 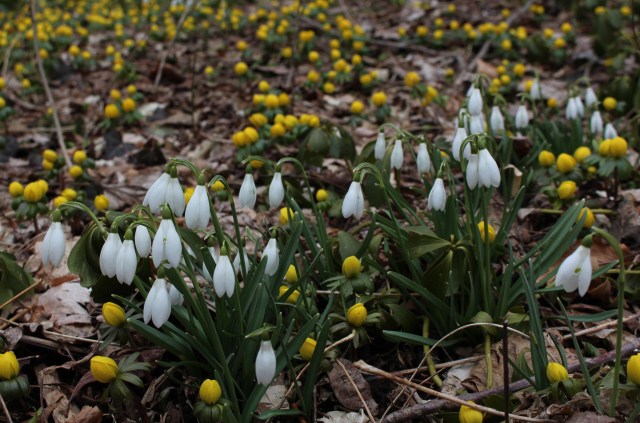 There was little variation amongst the plants (all galanthus nivalis), but how can you beat the pure white flowers and fresh healthy clumps.  Special or not I admit I “liberated” a bunch found growing in a rubble pile next to the foundation.  Maybe they’ll start their own sheet of white at my own house, and live on after these drops are likely erased in some future redevelopment plan. 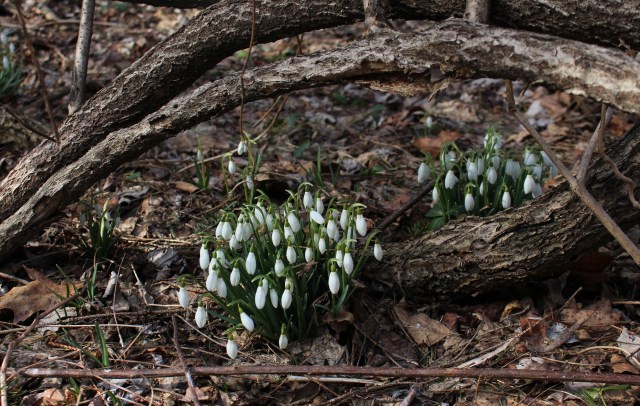 Galanthus nivalis filling in and doing its thing before the oriental bittersweet leafs out again and refreshes its chokehold on this woodland.

Abandoned house=spooky, and no matter how blue the sky or how nice the sun was coming out it still wasn’t a place we wanted to open the picnic basket at, so we wrapped things up, jumped back in the car, and headed on to our next spot. 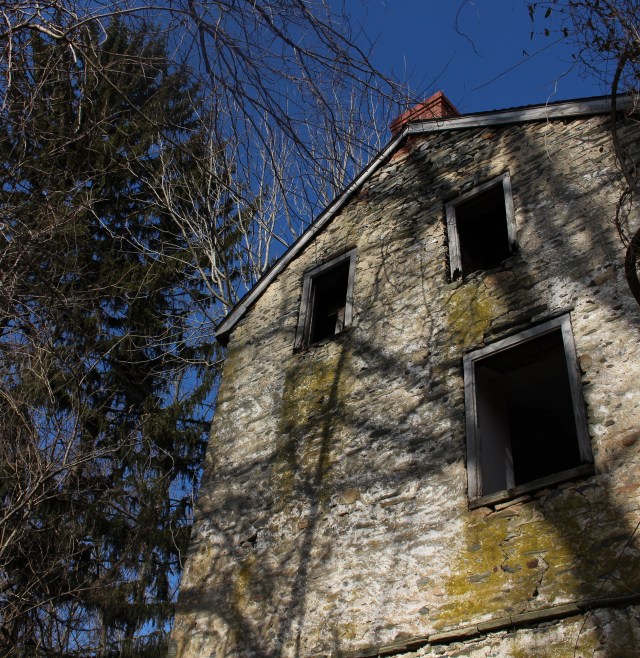 I sure didn’t want to enter the building even if the walls still look solid… but even if I was feeling brave, those dark, empty windows still give me the creeps.

We are such slow, lingering adventurers that by the time we made it to our final stop the light was already at that low springtime evening angle which gives everything a nice glow.  Perfect for a real photographer, but even my point and shoot method gave me a few decent pictures. 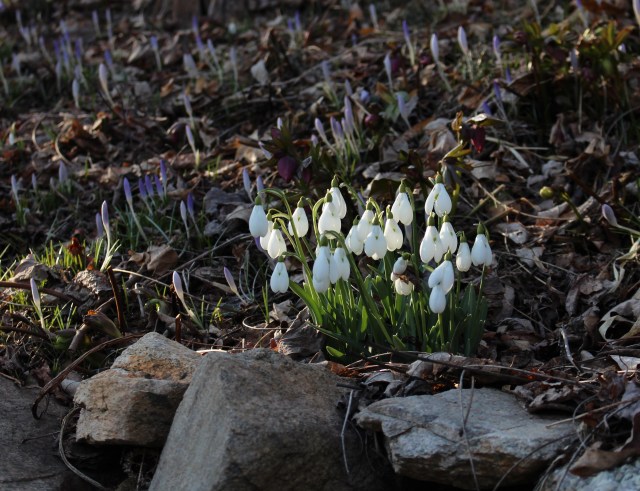 Galanthus ‘Sam Arnott’.  Seeing this makes me forget all the snow and ice back home.

When we first pulled into our friend’s driveway I just let out a hushed wow.  I’ve never been anywhere that has clumps of special snowdrops lining the driveway, and to tell the truth I was so distracted I forgot to take pictures. 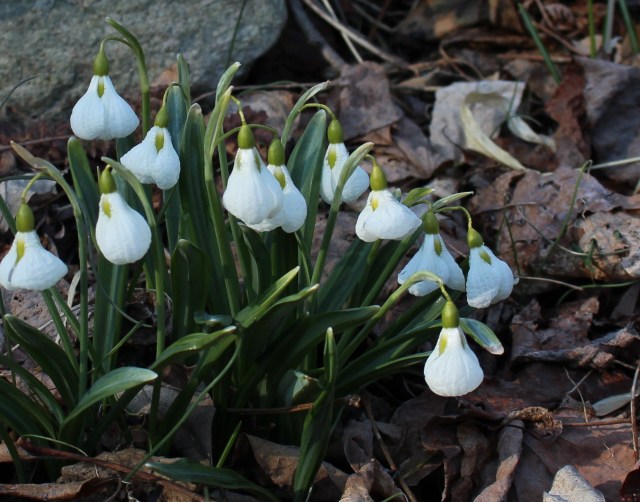 This clump of galanthus ‘diggory’ makes me understand why it’s such a coveted snowdrop. Those fat little pantaloons of white would look great in any garden and I’m excited to think I might have one lined up for this summer 🙂

We spent the rest of the day here of course, talking, exploring, and just plain old soaking up the time with snowdrop friends.  Of course there were other plants too but I think all involved were just a little obsessed with one plant group right now 😉 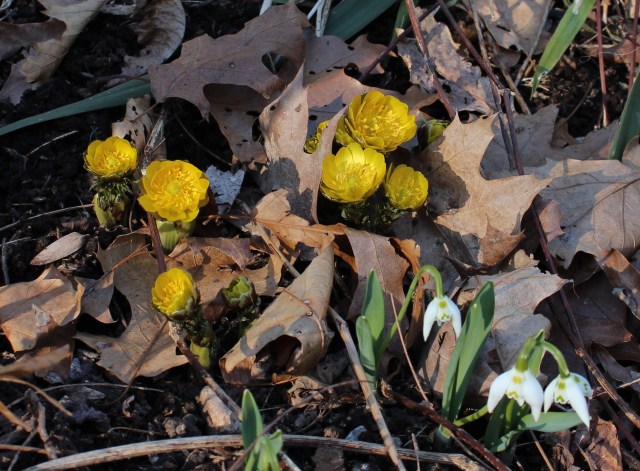 Yellow adonis amurensis ‘fukujukai?’ with what else but a snowdrop.

This friend likes to bulk the clumps up before putting them out in the open garden.  This was another wow moment looking at the drops which I only knew by name until today. 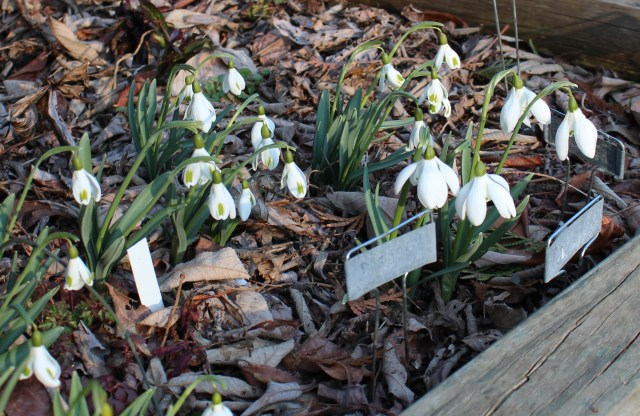 Along the back are a few ‘Trym’ types with their green outer patches and the lovely ‘Mrs Thompson’ is in the front.  This is the kind of planting which makes me glad I wasn’t left alone with only my conscience to guide me.

There were plenty of things for the wishlist on this trip, but gardeners if anything are sometimes generous to a fault.  I couldn’t believe the haul which filled my trunk on the way home, a mix of purchased plants which my friend had picked up for me on an earlier trip, plus some other goodies which she knew I wanted.  I felt guilty as we walked from spot to spot with a shovel, but to look at them now just makes me even more excited about spring. 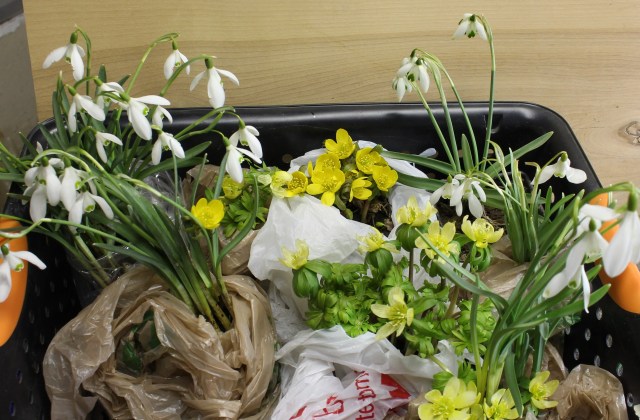 This tub of galanthus and eranthis could be its own garden.

Spring has got to be close now, and the fact that it rained today made me realize just how long it’s been since something non-frozen has fallen from the sky.  I wasn’t thrilled to be out there, but it was perfect weather for planting new snowdrops from our trip, plus two new ones which I found in the mailbox today from Carolyn’s Shade Gardens! Bring it on I say 🙂

33 comments on “When the going gets tough….”

a suburban garden through the seasons