Last Saturday some friends and I made the trip up to Trumansburg, NY for what I hope will become an annual tradition; the open day at Hitch Lyman’s Temple Garden Nursery.  As was the case in 2013, winter still had a firm grip on the weather so a thick coat was essential (and gloves and hat and scarf), but at least there was more mud than ice this year.  That’s a start….

First garden tour of the year!

For those who don’t know, Mr. Lyman is (among other things of course) a lover of snowdrops, and his Temple Nursery catalog is the most specialized retail source for snowdrops in the US.  There are other great sources out there now, but Hitch has been dealing snowdrops since before they became cool (am I the only one who considers them cool?), and his collection is considered to be the largest in this country with around 400 varieties planted throughout the property.

Snowdrops all over, patches big and small, named/unnamed…. heaven for the galanthophile (snowdrop lover)

The bank along the driveway is the first planting you see, and here’s my first favorite, galanthus “Wasp”, with its long wispy blooms.  Not that I’m stalking Mr. Lyman’s snowdrops, but I just want to say it looks so much better this year upright and not all flat and frozen.   8 blooms this year (up from 4 the year before -in case you’re wondering).  I took a lot of pictures last year too 🙂 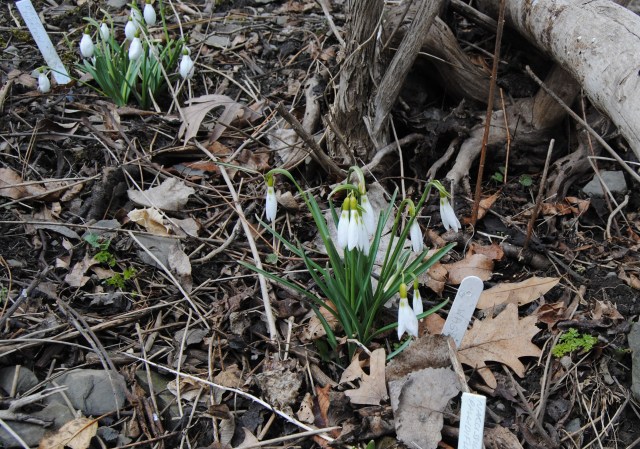 Galanthus “Wasp” with “Dodo Norton” in the back

I could go on and on about my visit but I’ll try to keep this somewhat short.  I referred to Hitch as a dealer of snowdrops, and I think that’s an appropriate term for someone who sells something so addictive…. here’s galanthus “Naughton” (also just 4 blooms last year)  Hope it bulks up quick enough to make it into the catalog soon! 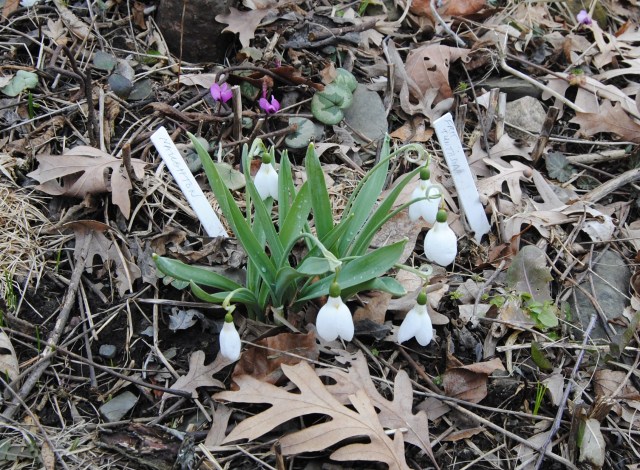 Galanthus “Naughton”. Maybe it’s a little droopy, but the flowers are so big, and I love the little curl to the pedicle(?) just above the bloom.

Doubles are starting to grow on me.  Even the smaller blooms that normally bore me.  “Cornwall Gem” has small sideways blooms that are held further out from the stem. 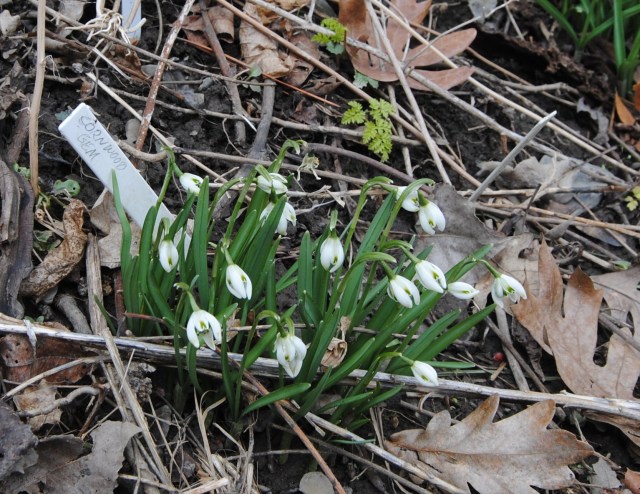 “Mordred” has a nice fat look that I liked.  It’s hard to say for sure though if this fat look stays,  since it could change completely as the flowers expand and open (if the weather ever improves).  Odd that for this one the sun came out, with a name like Mordred I would have expected even more dark grey ‘Lord of the Rings’ weather to rain down. 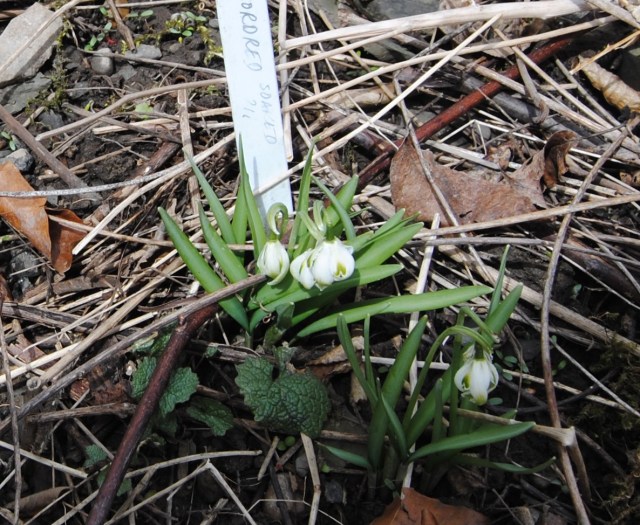 Once up the driveway we were invited in to the house for signing in and paying the $5 admission fee.  We had only been out of doors for 20 minutes at most, and the break from the cold was already a welcome relief!

One of the most welcoming sign-ins ever! It’s hard to see, but some of those cut snowdrops were huge, and the cookies and muffins were a nice touch.

Out again and into the snowdrops.  There’s a more formal part of the garden out back beyond the garden’s namesake temple.  My traveling company spent most of their visit inside the temple, next to the warm fire.  Fortunately they weren’t offered wine or else I suspect we never would have gotten them out of there!

Hitch Lyman’s backyard temple. Even though the pond was unfrozen this year, the fireplace inside was still a welcomed retreat from the cold.

From what I could see, the formal garden promised an explosion of lilacs , hellebores, and peonies as well as the small bulbs which were scattered throughout.  In past years I’ve seen reports on the summer garden, but I don’t believe he’s opened it in the last few years.  Maybe someday I’ll be able to see this in person when it’s green.

A small part of the formal garden. Apples trained to goblet shapes, beds filled with perennials, lilacs and tree peonies everywhere, and buds of hellebores and herbaceous peonies sprouting all over.

Close ups of the beds showed plenty of signs of spring, snowdrops and winter aconite (eranthis) plus many other goodies on their way.

Winter aconite waiting for the sun to open up, snowdrops scattered throughout.

Personally I was fine poking around in the still dormant beds looking at goodies, but the bulk of  Mr. Lyman’s snowdrops are in the back of the property and it’s there we rushed off to next.  To keep things moving along, here are more favorites, such as “Ballerina” a very neatly arranged double.

….and “Flocon De Neige”, a wish list snowdrop.  Easily on my top 10 or even top 5.  It’s hard to say since I don’t actually dare put a wish list together. 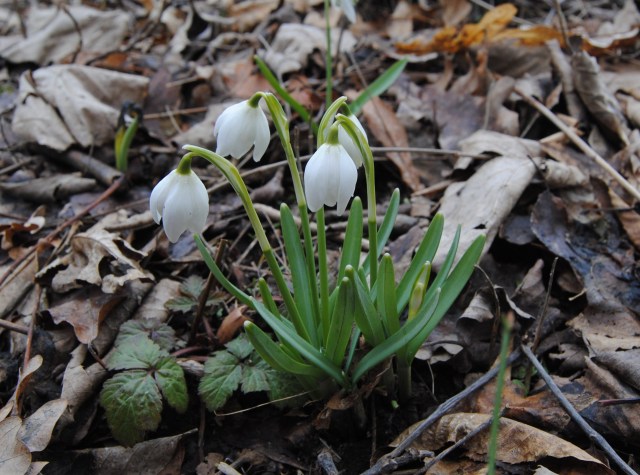 “Pricilla Bacon”, part of a healthy patch all with perfect large rounded flowers.

The odd little “Alburg Claw”.  Not a great picture, but There’s some kind of strange attractiveness to this one. 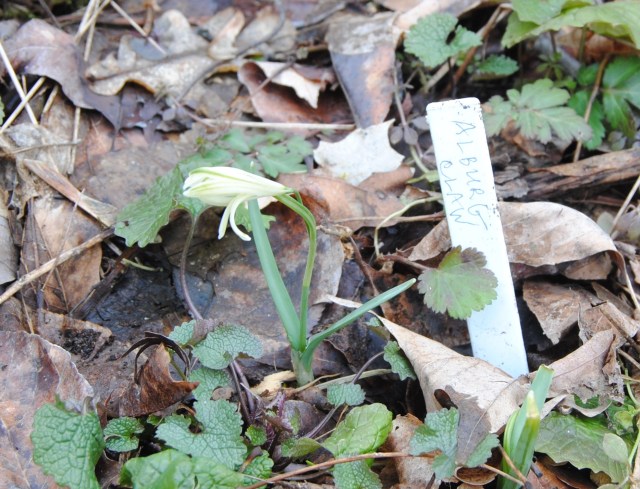 Galanthus “Alburg Claw”, a tiny plant which I hope to see thriving during next year’s visit.

The snowdrop plantings lined a taped off trail that meandered through the woods.  You could tell quite some work had been done to get the gardens ready for this Garden Conservancy Open Day, brush was cleared, patches labeled, sprouts uncovered.  All this must have been carried out in the last four days since our most recent snow storm!

Trail through the snowdrop woodland. Snowdrops extended deep into the trees, and I can only imagine all the additional treasure growing on in the distance.

I felt as if there were easily twice as many snowdrops as remembered from my last visit.  Warmer weather and another year’s growth seemed to make all the difference, plus I recognized a few names which seemed to have been moved here from off the driveway bank.  “Sophie North” was now in the woods, and this unidentified favorite from last year now has a name too.  It’s galanthus “R.D. Nutt”(and was only two bulbs last year!) 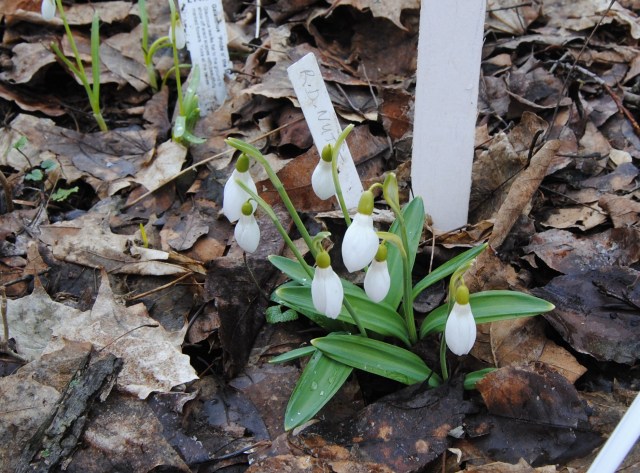 A few really stood out for having big blooms.  This is “Grayswood” who’s blooms are easily an inch long.  I don’t have small hands. 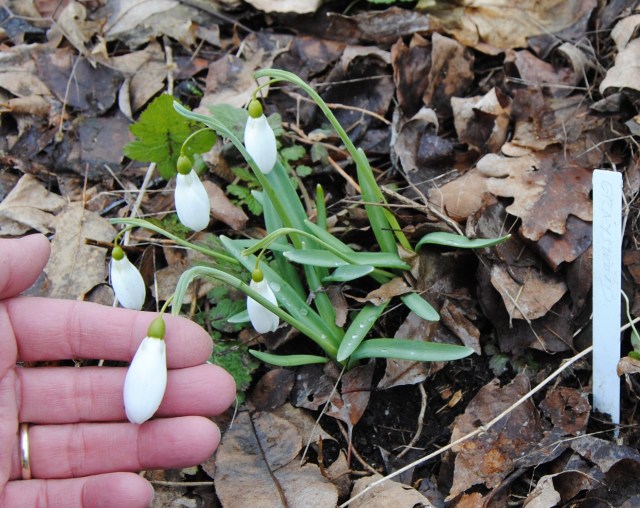 Not the best picture of galanthus “Grayswood”. It’s listed as having four outer petals, but I didn’t have enough sense to look. In my defense my hands were probably freezing at this moment.

“Imbolc” is another one I’d put in the short fat group (a good group to be in if you’re a snowdrop).  Technically it’s out of the “Mighty Atom” group, a strain of stocky, large flowered drops, but until my snowdrop sophistication grows….

Galanthus “Imbolc”. I love this one, but have two related ones which are similar, so it’s closer to top 20, and not top 5.

“Major Pam”, a nice clump which was offered in Mr. Lyman’s catalog this year.  Tight, neatly organized blooms with short inners, it’s part of my “I don’t like doubles” remission.

You’re doing well if you made it this far.  I’m almost done so here’s “Peardrop” showing two blooms per bulb, nice long blooms…. I’m not sure if the bulbs to the left are also pear related, but the one on the right looks to be a real nice drop. 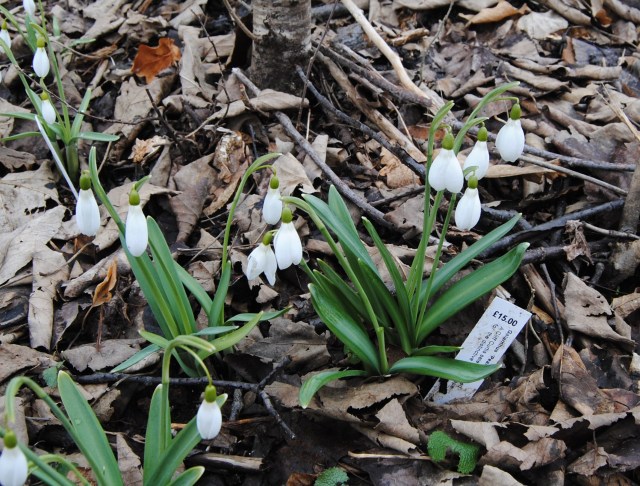 Galanthus “Mrs. Thompson”.  Almost always referred to as a ‘variable snowdrop’ because it can be all over the place with extra petals, twin flowers, Siamese twin flowers…. I think it really makes for a nice display, but I wonder what the real Mrs. Thompson thought of having such a fickle flower named after her?

I included “Richard Ayres” because one of my hardier traveling companions told a nice story about meeting the real Mr. Ayres when this was spotted.  I always love a good story, too bad the sun couldn’t come out to open him up a little. 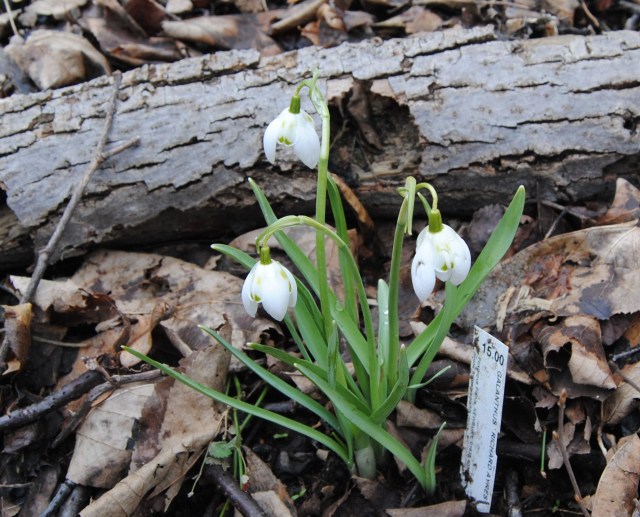 Finally a little hope for my ugly duckling of the snowdrop patch, galanthus “Blewbury Tart”.  Grown well and in a bigger clump maybe someday mine can also have an attractive oddness to it, instead of just plain old oddness.

Galanthus “Blewbury Tart”, a ‘unique’ looking snowdrop that still needs some time to grow on me.

So thanks for sticking with me for way too much galanthus talk.  We probably spent about three hours out in the cold and I believe it confirmed my and my friend’s suspicions that there’s something deeply wrong with my idea of fun.  With frozen toes and fingers we returned to the house and headed around the side for one last look.  Unless it was the hypothermia talking, there was still a point here when I actually may have skipped across the grass to look at another snowdrop.  I’m that far gone.

A beautiful springtime sky in western New York. It almost makes you want to take a dip in the fountain 🙂

I have my fingers crossed for next year.  Maybe the sun will come out and maybe I’ll even have the courage to talk to Mr. Lyman.  Despite the cold and wind he was out and about in the gardens mingling, answering questions, and probably just plain enjoying the return of green (and white) things such as “Mrs. Wrightston’s Double”.

So that’s it.  It may seem odd to those of you in Europe to again be looking at snowdrops (you’re probably in bathing suits by now) but for us it’s only just turning in to warmer weather.  I’m happy for that, and I’m happy to see green things returning here too.

Thanks again to Mr Lyman for another enjoyable visit and continuing to open his garden to visitors, and if you’re interested in receiving a snowdrop catalog, word on the street is to send three or four dollars to the following address: Temple Nursery (H Lyman) Box 591 Trumansburg, NY 14886.  Catalogs go out in January and the drops are usually sold out within a few weeks.

20 comments on “Back to the Temple”