I have faith in March this year.  I think he’s a changed month and there will be none of the shenanigans he usually throws our way in terms of weather extremes and spring crushing snow loads.  I think.

Up by the shelter of the front porch, this clump of snowdrops and winter aconite are always first in bloom… even if for only a few hours between snow melts…

It’s only just the first week of course, and this optimism is based entirely on the few hours between Saturday’s snowfall melting off, the sun coming out, above freezing temperatures for just three or so hours, and then the next snowstorm rolling in Sunday afternoon.  I was quick to run out though and take a few pictures while the flowers were also feeling optimistic.

I went ahead (perhaps foolishly) and planted out the new witch hazels in whatever decent, unfrozen, spots I could find.  This is ‘Diane’ crammed into a spot close to the street.

Most of the garden is still fully winter, but if I crop out the patches of snow and focus on the few patches of early snowdrops, winter aconite (Eranthis hyemalis), and witch hazels, well I guess you can have a little hope for spring.

Hamamelis ‘Barmstedt Gold’ a little further down the border with the earliest snowdrops to appear in the open garden.  ‘Gerard Parker’ is the name of the snowdrop in case you’re wondering, and yes, I still need to do a little cleanup here…

This is the time of year which consists of me shuffling back and forth between the same few spots and poking and prodding every last shoot in an attempt to get them to sprout faster.  I doubt it helps, but on a “warmer” day I’m out there way more than the weather deserves and I’m sure it rolls some eyes.  My neighbor refers to it as ‘you’re out taking pictures of dirt again, aren’t you’ season, and that always reminds me that I should really find a more private spot in the backyard to raise these plants. 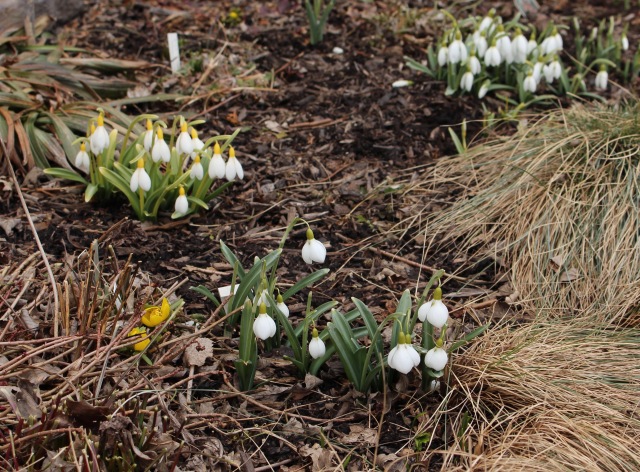 Also in front amongst the shelter of the foundation plantings, galanthus ‘Diggory’ is just coming in to  bloom with ‘Wendy’s Gold’ behind.

The thrill was short-lived.  We ended up with about six inches and although it’s pretty and not all that cold I won’t be sharing any of those pictures.  Im huddling indoors and for my plant-fix it’s back to the snow-free, yet underwhelming winter garden in the rear of the garage. 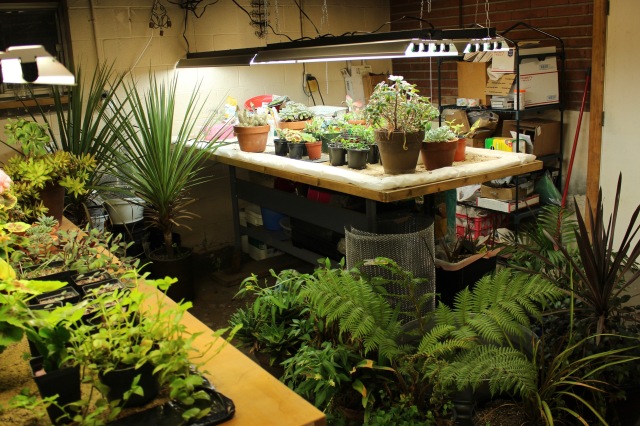 The last of the woodshop nonsense is finally out of this area and I’m making it 100% plants.  Nothing too exciting going on, but new seeds and cuttings are exciting enough for me, and I’ll show more of that in time.

So just a couple more days and I’m sure March will be showing his more personable side.  I don’t think I’m asking for too much, just no hailstorms or blizzards this year please.

On a side note, this upcoming weekend (Saturday, March 9th) marks the third annual Galanthus Gala, hosted by David Culp of Downingtown Pennsylvania.  This event is sure to thrill snowdrop lovers and plant lovers in general, and is normally one of the highlights of my late winter snowdrop-a-thon.  Alas this year I cannot attend, and the thoughts of missing out on seeing friends and browsing sales tables and talking gardens would have me depressed if I happened to dwell on it too long, so I won’t.  I will just recommend that you should go if you can, stop by, rub elbows with the garden obsessed from the US and beyond, sit in for a few talks, and maybe leave with a few new goodies.  I hear that besides a healthy supply of snowdrops and such, there will be even more hellebores and also a nice haul of witch hazels this year.  Perhaps my wallet will appreciate missing out on more witch hazels but I’m going to be a little crabby about that for a while.

In any case, all the best for March and have a great week!

After what seems like the longest stretch of gloomy weather ever in all recorded time, the sun finally came out.  The cold came along with it, and that’s probably related, but it was worth it to see all that brightness again.  Walking across a frozen lawn with the sun on my face is something I’d been missing for the last few months as I’ve been more used to shuffling in order to keep from slipping in the muddy mess I’ve been calling a yard.  The sun also lifted some of the gloom and anxiety of all the earth-moving thats still going on behind the house.

The lights of the industrial park seem to have caused a little state of emergency down at town hall, and apparently the mayor has declared that a wall must be built.  So far the wall is completely ineffective in stopping the lights, but we now have a big beautiful wall of dirt and of course that must be a great thing.

Before this post turns into what looks like just another ‘woe is me’ update I want to say again I’m over it, and whatever happens happens.  I just want all this mess to be done so I can go back to tending my little plot in peace, and if that doesn’t work out we can always move.  In the meantime I’ll keep myself busy with regular runs into the construction zone to steal even more interesting rocks for the garden 🙂

One of the dump trucks was rich in a bunch of relatively flat pieces of Pennsylvania bluestone.  You can never have enough stepping stones so of course I was pleased.

This afternoon I was inspired by the sunshine and upgraded the little stone accents in the front foundation plantings with some heftier rocks.  It was easy enough to roll them around on the frozen soil, but the problem will come later when some planting I forgot all about sprouts up right where I dropped a 100 pound rock.

I’ll move the rocks some once spring arrives, but in the meantime I already like being able to jump from stone to stone rather than step on every important sprout that I forget is there.

Those who like to point out the obvious will note that I should have used stepping stones rather than boulders if I was going to use them as stepping stones.  I’d say that’s a good point.

If you notice the big white bucket in the middle of the foundation plantings, and think you’re doing me a favor in cleaning it up, you’ll notice instead two foolishly early snowdrops sheltered underneath.  Galanthus ‘Three Ships’ usually set sails for Christmas, but here in the cold north the end of January is more likely, and I for one am relieved I haven’t killed them yet.

Honestly I was a little bored as I wandered about in the sun.  You can only haul so many rocks, I wasn’t dressed warmly enough to just sit in the sun, and even for me it’s still too early for any serious cleanup so pruning was about all I could think of.  I stood for maybe twenty minutes clipping dead leaves off the witch hazel.  The flower buds were just starting to open and although clipping individual dead leaves off a bush in January is possibly the most pointless thing to do, I did it.

When you consider the usual barks and foliage that pass for winter interest in the northern zones I don’t get quite as excited as many gardeners do.  I appreciate them, but I’m more of a flower kind of guy, and the fact that I was able find a few blooms here in NE Pennsylvania in almost the middle of January, while temperatures hovered at just below freezing,  it made me pretty happy.

Of course a greenhouse would probably make me happy too, but for now I’m going to stick with adding more witch hazels.  Have a great week.

I’m trying to get through all these mail order catalogs.  Over the years I’m getting better but there are still only a few that I right out throw to the trash.  Michigan Bulb and Burgess are two that go on the fast track to recycling…. maybe a reincarnation as toilet paper or anything else more useful than their current state.  The rest all stand half a chance on the growing pile of winter reading material.

If you’re considering a first time order from a new-to-you company, always take the time to check out the garden watchdog at Dave’s Garden. I’m not saying their reviews are the final word on any company, but if 90% percent of the posts are complaints…. well at least you’ll know where to find plenty of company when you end up with a bad experience.

My regulars (a mix of lower prices combined with quality offerings) are Pinetree Garden Seeds, Santa Rosa gardens, Jungs(so-so reviews so be careful), Brent and Becky’s Bulbs, and Fedco Seeds. If the budget was bigger I would add Song Sparrow Farms, Forestfarm, Rarefind nursery, the Lily Garden, Oakes…. they are all worth the extra money for the quality of their offerings, but a budget is a budget.

The rain and warmth of yesterday following the near zero temperatures of last week are giving us a roller coaster of a winter.  The snowdrops are on their own schedule though, and the first one is officially up today.  Galanthus elwesii in case you’re wondering.

The inch of snow must have been enough protection for this drop.  In another more exposed spot, the plants look more like snow-drips.  Hopefully they will live to bloom another year.

Also open for the first time today, but less photogenic, is the “pallida” witch hazel.

A Room With A View
Wave Hill Blog