Longer days and stronger sunshine doesn’t necessarily mean it’s springtime.  Warmer weather and a lack of snowstorms means spring to me, and since we’re 0-2 on that front, this weekend’s forecast of almost normal weather gives me some hope that the snow may eventually melt.  My fingers are crossed that the receding snow will reveal healthy snowdrop sprouts, and in the front bed along the foundation this might be true.  This bunch has come along since the last time it was uncovered (Jan 13th), but it’s still far behind last year’s bloom date of Jan 31st.  Still it amazes me that even under feet of snow and temperatures down to 0F (-18C) they continue to grow, disregarding the frozen soil and surrounding ice.

Indoors is a different story.  The forced snowdrops are at their peak, and I regret giving them the cold shoulder in my last post.

There’s plenty of variation in bloom shape, plant height, and color and pattern of the green markings inside.  I’m quite pleased all over again and it makes me even more excited the ones outside might someday open!

A better gardener would keep track of their favorites, and carefully plant them out for observation…. but I’m just fine with big patches of anonymous white.  If there are a few real special ones I can separate them out, but we’ll see what happens once they have a chance to grow outside in the real garden.  The pale drops are nice, but the dark green markings such as this one also look interesting once open.

This one has such a stumpy, stout stem (but small bloom) that it really contrasts with the daintier one to the lower right of this photo.

Having potted up all 200 of my bulbs for growing indoors, there are pots all over.  I might have gone a bit overboard since usually the windowsills are reserved for post-bloom hangout until things warm up enough to go outside.

I’ve been pollinating away, so hopefully there will be a few snowdrop seeds to start this summer.  My fingers are crossed since it looks like the sprouts I had coming along with so much promise in January all died during the last couple arctic blasts.

There’s a different kind of hope though.  Birds are singing in the sunshine in a way not heard since last spring, and this little guy was spotted rooting around under the feeder.  He’s not a mouse or vole, but a little half-blind shrew.  I’ve never seen one out (alive) but this guy let me take his close-up from about 12 inches away while he burrowed around in the seed hulls looking for bugs and whatnot.  He’s an interesting guy, one of only a few poisonous mammals (their saliva is toxic enough to kill a similar sized animal), and their hyperactive lifestyle has them eating nearly their entire weight in food each day.  They’re also a little stinky, which we discovered last fall when an opening in the foundation let a couple into the basement. 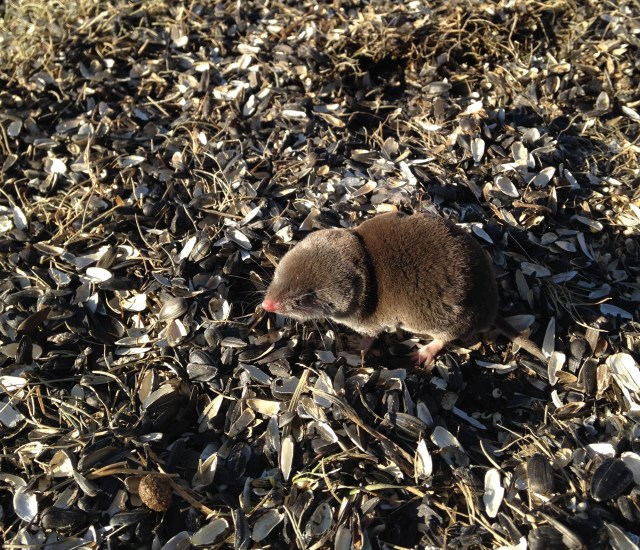 Stay out by the feeder is all I have to say… that and have a great weekend!

This is a post only a gardener could love…. and even at that it would need to be a gardener stuck in the cold and gray of a Northern January.  Only a cabin fever gardener would care about the first tiny green sprout of a snowdrop coming up among the freezer-burnt hellebore foliage. 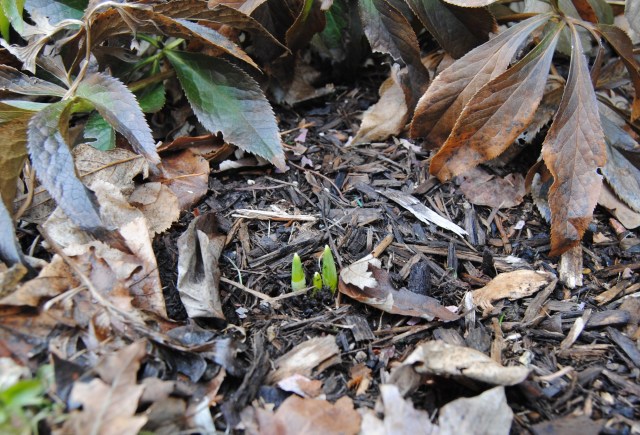 Just a few days after temperatures dropped to -6F (-21C), the warmth has returned, the ground is thawing and I’m back outside poking for the first signs of spring.  The snowdrops (galanthus elwesii) seemed way too early but then after checking last year’s notes I saw the first was open January 31st last year, and I suppose we’re right on schedule.  Using this as a clue I checked the seed pots and saw minute sprouts there.  Yay!  These little babies might have to come in under the lights, a pot like this is something I might have to check every day!  **btw there are two tiny sprouts, just in case you can’t see them 🙂

Elsewhere in the garden some of the snowdrops (also galanthus elwesii) forced under lights last year are also ready for the new season.  I keep throwing more mulch on them to slow them down, but they insist on coming up and facing the frigid ice and blowing snow unprotected. 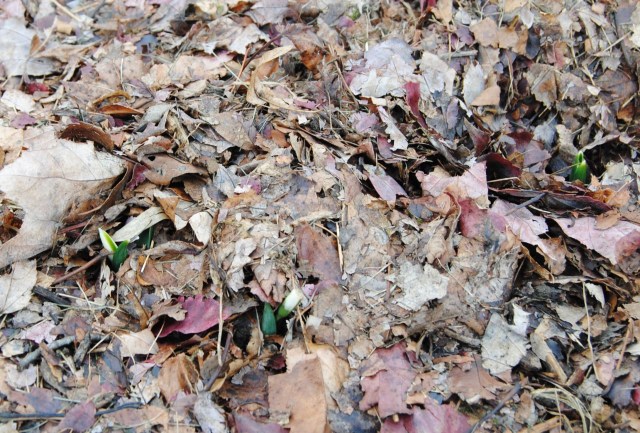 I wish I cold post a couple witch hazel blooms, but mine is refusing to bloom this year.  It does that, going on and off depending on its mood.  So in a desperate bid for anything interesting, here are a few colchicum sprouts already showing.  Colchicum are another plant that insists on worrying me with a too-early showing. 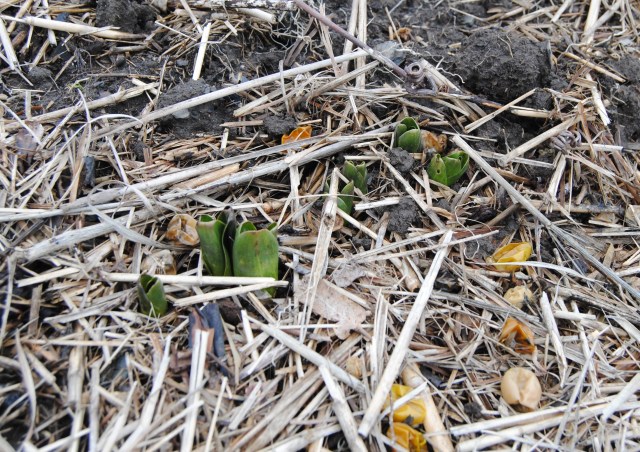 One plant that did not appear to enjoy the polar vortex is this cyclamen coum.  The warm front that preceded the artic blast melted off all our snow cover and these little guys were forced to endure the straight on winds without any windbreaks or mulch cover.  I’m hoping the dark shriveled green of the leaves is not a sign of death…..

To leave off on a good note this hellebore “HGC Silvermoon” is only showing the typical winter foliage damage.  It’s in a full sun position but was engulfed by a neighboring catmint plant during the summer.  The plant doesn’t seem to care and I’m looking forward to a nice show soon (now that I can see it again!)

So that’s it from here.  Not much, but it’s always nice to be able to get out there for a look around during the daylight hours.  It gives me time to contemplate failed projects such as the leaking pond shell, the hole of which is holding more water than when the pond liner was in there.  In my head I will fix it and end up happy….. right now it just annoys me whenever I pass. 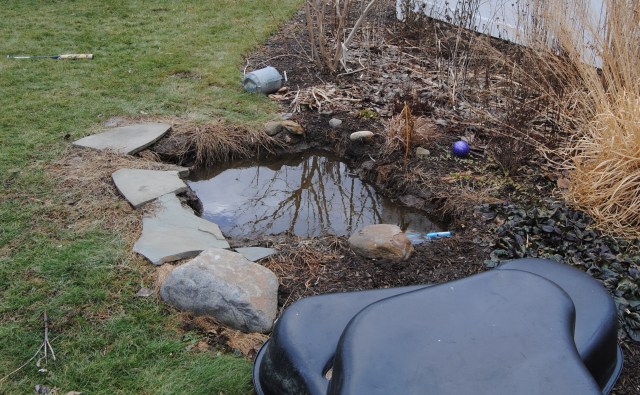 But it’s nice to be outside doing something other than shoveling snow.  There’s still a month at least before any thoughts of spring become legitimate, so I need to take it easy.  Another good cold snap would do well to cool this spring fever off, but I’m worried about what more indoor computer time would do.  Right now the budget is blown for spring and it has a lot to do with that easy click that brings plant goodies right to your door….. there’s still a long way to go, and I hope you’re doing better than I’ve been!

From The Mountains To The Sea