I’m beginning to get a little insecure about my lack of winter flowers and garden structure.  All I see is white and more white, and although I suppose a nice steady winter of cold and snow cover is far better than ice and repeated freeze-thaw, the strengthening sun is starting to make me antsy for growing things.

Icicles harvested from the garden.

A good crop of icicles is all I could find in the garden for Cathy’s vase on Monday meme.  They’re from the garden, they’re in a vase, but I don’t think they’ll be gracing the dining room table.

Give Cathy’s blog a visit for some real garden inspiration.  Each Monday she encourages us to get out there and see what the garden has to offer for a nice vase, and each Monday people rise to the occasion.  Hopefully in another few weeks there will be something worthy from this end 🙂

Congratulations are in order for Cathy at Rambling in the Garden for reaching the one year milestone of her weekly “In a Vase on Monday” meme.  Each week for the last 52 she’s been encouraging people to fill a vase with whatever strikes their fancy in the garden or in the local meadows and woods.  I’m always amazed by the creativity and depth of the creations, and although my own contributions never manage to get outside the ‘pluck and plunk’ category they’re always well received and the whole process is fun.  This week I’m joining in again and just in time too.  The last of the autumn flowers are limping into winter, and the weather forecast doesn’t look good for them this weekend.

The last of the chrysanthemums.

Three of the latest chrysanthemums are still hanging on; an unknown white which has been blushed pink by the cold nights, the spooned frosty violet flowers of “Carousel”, and the neat pink pom-poms of a self seeded volunteer.  It’s nice to still having some flowers out there even after the trees have lost their leaves and most other perennials have died back.

There’s nothing fancy about the vase, again it’s just my favorite flowers in a simple clear glass.

Score another victory for laziness. A couple years ago I missed weeding out some self seeded chrysanthemums. This small pink was my reward.

This might be the last flower filled vase of my gardening year, but it’s the first for Cathy’s 2014/15 season.  Congratulations!

This is actually an ‘In the Vase on Sunday’.  With a freeze forecast for Sunday night I wanted to get out there and save the last bits of summer for just a few more days (a vase full of frost blackened flowers wouldn’t be as welcome on the dinner table).  Zinnias, dahlias, and chrysanthemums fill (some would say overfill) this week’s vase. 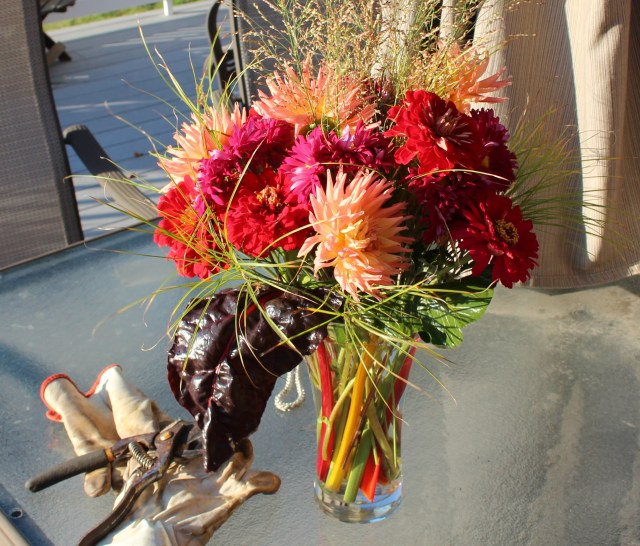 The late afternoon light and cool nighttime temperatures of fall really bring a glow to the zinnias and dahlias.

The dahlias are still the backbone of this arrangement.  It’s been flowering for months, and even with a healthy wash of mildew over its leaves the flowers just keep on coming.  Red zinnias and dark pink daisy chrysanthemums fill in between, and a few seed heads of panicum and tufts of papyrus reed lighten up the mix.  I thought I’d add some “bright lights” swiss chard for the lusty leaves, but it’s the colored stalks which really stand out.  Maybe I’ll just include them for the stems alone next time!

This arrangement is fresh and bright enough to carry an August picnic table, if it weren’t for the chrysanthemums you wouldn’t even know it was fall.

I spent the rest of the afternoon lugging pots into the garage and taking coleus cuttings.  Although a few of the hardier pots stayed out overnight (geraniums, oleander, dracaena), the rest have begun their six month imprisonment in the dungeon.  I won’t water them, they’ll look terrible, but hopefully they’ll go somewhat dormant rather than keep trying to grow and as a result die.

Inside the house the colors go well with the Halloween and harvest decorations. A few little pumpkins would look great alongside the vase but the kids insist they stay on the porch  🙂

Our freeze didn’t amount to any more than a frozen windshield and a few singed coleus, but it’s good to have much of the sheltering of plants done.  Now all I have to do is reorganize them enough to fit a car in there too!

Looking at the long range forecast there’s a strong possibility next Monday will also host a vase full of flowers (chrysanthemums I hope!), so it will be nice to join in on the Monday vase meme a few more times before snow flies.  If you’d like to join in or take a peek at what others are up to, drop by Cathy at Rambling in the Garden and take a look.  Each Monday I’m surprised at what people put together!

In celebration of Labor Day and a Monday away from work, I’m once again making a contribution to the ‘In a Vase on Monday’ movement.  It may not exactly be a world changing movement, but it’s fun and does motivate me to bring a few flowers into the house so look at how it’s changing lives! 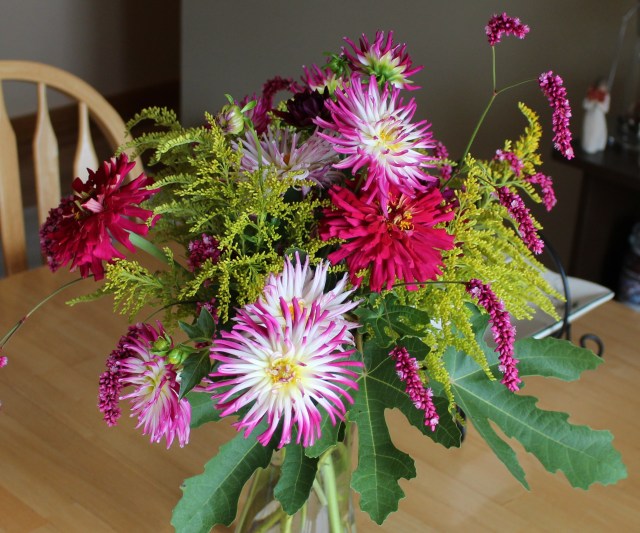 Another pluck and plunk arrangement. I didn’t realize how unbalanced it was until after I looked at the photos!

This week’s arrangement was inspired by Kimberley at Cosmos and Cleome.  In a recent vase Kimberley had the good sense to add a few sprays of goldenrod in to fill things up, and it took that vase to make me realize I have a ton of the stuff growing all over the place and should do the same!

The just barely blooming goldenrod has a nice soft color and fills in well. It’s like a redneck version of baby’s breath plucked from the roadside.

Besides the goldenrod, this vase has the pink tipped blossoms of dahlia ‘Tanjoh’, a purplish red dahlia (maybe ‘Plum Pretty’?), a few zinnias, a couple pink sprays of ‘kiss me over the garden gate’ (persicaria orientalis), and a few fig leaves which were in the way of my boxwood trimming.  I like it 🙂

The goldenrod makes up nearly half of the arrangement yet you really just notice the larger blooms. Such is the curse of a ‘filler’…

With all the goldenrod coming into bloom I may have to admit to myself that autumn is approaching.  On the road to college I was always disgusted by the mass of goldenrod yellow filling the fields along the highway, and it’s always been a mental marker for the end of summer and the return to work.  I guess that’s my bias against the plant, but because of its native status I tolerate it when a seedling shows up.

There are more than enough wayward areas around the garden for goldenrod to sneak in a rod or two.

Not to stray too far from my Monday vase, but I guess some goldenrod annoys me less than others.  One of the species is only just starting to color, and I think it’s my current favorite.

Goldenrod just coming into flower along with some staghorn sumac which the starlings and robins will enjoy this winter.

This floppy one is not a favorite.  Once it’s finished blooming I’ll run back here and mow things down to give the grass a chance. 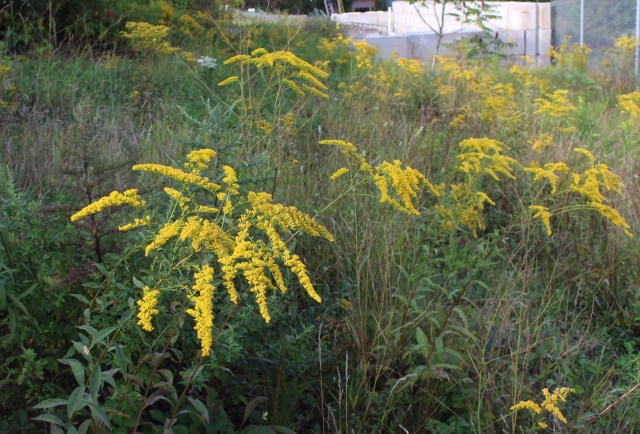 Not a bad goldenrod, there’s just too much and I’d rather leave a little room for some of the asters which are yet to come.

Here’s my last goldenrod.  I don’t know any of the species but this one’s a smaller, leaner version.  I would almost say I like it.

Unknown goldenrod…. any ideas? This one’s about two feet tall and like the others doesn’t need a thing from me.

Thanks for staying with me for my little segue from cut flowers to roadside weeds.  They’re wildflowers of course, and if I can just get past my stereotyping I may be able to call them all cutflowers someday.

If you’d like to see other cutflowers more artfully arranged I’d encourage you to visit Cathy over at Rambling in the Garden.  You can check out what she and other bloggers around the world are doing for their own “In a Vase on Monday”.   Have a great week!